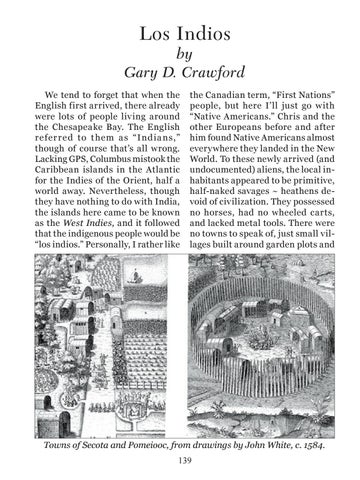 by Gary D. Crawford We tend to forget that when the English first arrived, there already were lots of people living around the Chesapeake Bay. The English refer re d to t hem a s “I nd ia n s,” though of course that’s all wrong. Lacking GPS, Columbus mistook the Caribbean islands in the Atlantic for the Indies of the Orient, half a world away. Nevertheless, though they have nothing to do with India, the islands here came to be known as the West Indies, and it followed that the indigenous people would be “los indios.” Personally, I rather like

the Canadian term, “First Nations” people, but here I’ll just go with “Native Americans.” Chris and the other Europeans before and after him found Native Americans almost everywhere they landed in the New World. To these newly arrived (and undocumented) aliens, the local inhabitants appeared to be primitive, half-naked savages ~ heathens devoid of civilization. They possessed no horses, had no wheeled carts, and lacked metal tools. There were no towns to speak of, just small villages built around garden plots and