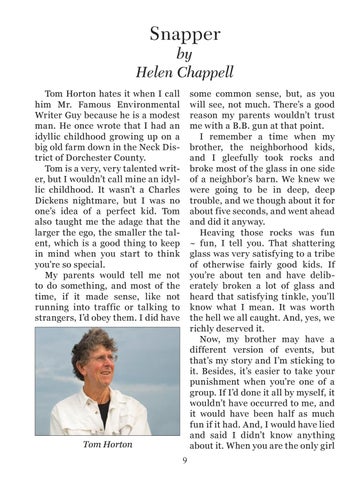 by Helen Chappell Tom Horton hates it when I call him Mr. Famous Environmental Writer Guy because he is a modest man. He once wrote that I had an idyllic childhood growing up on a big old farm down in the Neck District of Dorchester County. Tom is a very, very talented writer, but I wouldn’t call mine an idyllic childhood. It wasn’t a Charles Dickens nightmare, but I was no one’s idea of a perfect kid. Tom also taught me the adage that the larger the ego, the smaller the talent, which is a good thing to keep in mind when you start to think you’re so special. My parents would tell me not to do something, and most of the time, if it made sense, like not running into traffic or talking to strangers, I’d obey them. I did have

some common sense, but, as you will see, not much. There’s a good reason my parents wouldn’t trust me with a B.B. gun at that point. I remember a time when my brother, the neighborhood kids, and I gleefully took rocks and broke most of the glass in one side of a neighbor’s barn. We knew we were going to be in deep, deep trouble, and we though about it for about five seconds, and went ahead and did it anyway. Heaving those rocks was fun ~ fun, I tell you. That shattering glass was very satisfying to a tribe of otherwise fairly good kids. If you’re about ten and have deliberately broken a lot of glass and heard that satisfying tinkle, you’ll know what I mean. It was worth the hell we all caught. And, yes, we richly deserved it. Now, my brother may have a different version of events, but that’s my story and I’m sticking to it. Besides, it’s easier to take your punishment when you’re one of a group. If I’d done it all by myself, it wouldn’t have occurred to me, and it would have been half as much fun if it had. And, I would have lied and said I didn’t know anything about it. When you are the only girl