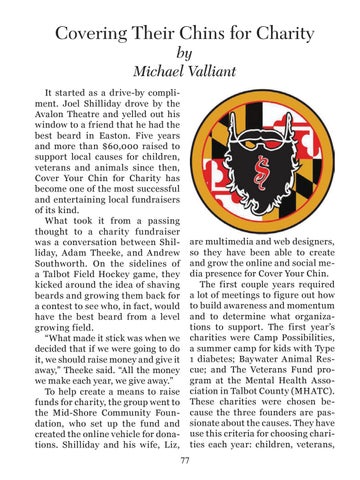 Covering Their Chins for Charity by Michael Valliant

It started as a drive-by compliment. Joel Shilliday drove by the Avalon Theatre and yelled out his window to a friend that he had the best beard in Easton. Five years and more than $60,000 raised to support local causes for children, veterans and animals since then, Cover Your Chin for Charity has become one of the most successful and entertaining local fundraisers of its kind. What took it from a passing thought to a charity fundraiser was a conversation between Shilliday, Adam Theeke, and Andrew Southworth. On the sidelines of a Talbot Field Hockey game, they kicked around the idea of shaving beards and growing them back for a contest to see who, in fact, would have the best beard from a level growing field. “What made it stick was when we decided that if we were going to do it, we should raise money and give it away,” Theeke said. “All the money we make each year, we give away.” To help create a means to raise funds for charity, the group went to the Mid-Shore Community Foundation, who set up the fund and created the online vehicle for donations. Shilliday and his wife, Liz,

are multimedia and web designers, so they have been able to create and grow the online and social media presence for Cover Your Chin. The first couple years required a lot of meetings to figure out how to build awareness and momentum and to determine what organizations to support. The first year’s charities were Camp Possibilities, a summer camp for kids with Type 1 diabetes; Baywater Animal Rescue; and The Veterans Fund program at the Mental Health Association in Talbot County (MHATC). These charities were chosen because the three founders are passionate about the causes. They have use this criteria for choosing charities each year: children, veterans, 77