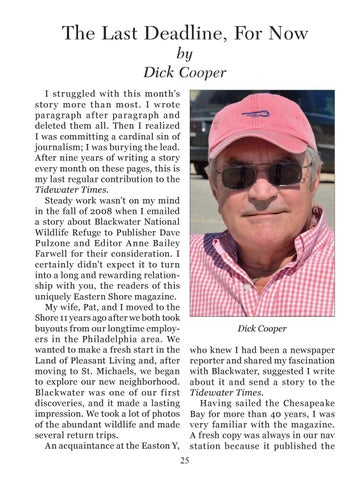 The Last Deadline, For Now by Dick Cooper

I str uggled w ith this month’s stor y more t ha n most. I w rote paragraph af ter paragraph and deleted them all. Then I realized I was committing a cardinal sin of journalism; I was burying the lead. After nine years of writing a story every month on these pages, this is my last regular contribution to the Tidewater Times. Steady work wasn’t on my mind in the fall of 2008 when I emailed a story about Blackwater National Wildlife Refuge to Publisher Dave Pulzone and Editor Anne Bailey Farwell for their consideration. I certainly didn’t expect it to turn into a long and rewarding relationship with you, the readers of this uniquely Eastern Shore magazine. My wife, Pat, and I moved to the Shore 11 years ago after we both took buyouts from our longtime employers in the Philadelphia area. We wanted to make a fresh start in the Land of Pleasant Living and, after moving to St. Michaels, we began to explore our new neighborhood. Blackwater was one of our f irst discoveries, and it made a lasting impression. We took a lot of photos of the abundant wildlife and made several return trips. An acquaintance at the Easton Y,

Dick Cooper who knew I had been a newspaper reporter and shared my fascination with Blackwater, suggested I write about it and send a stor y to the Tidewater Times. Having sailed the Chesapeake Bay for more than 40 years, I was very familiar with the magazine. A fresh copy was always in our nav station because it published the 25