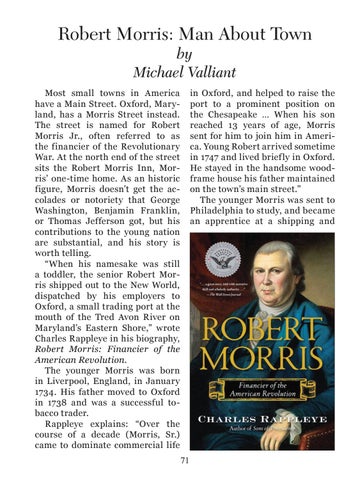 Most small towns in America have a Main Street. Oxford, Maryland, has a Morris Street instead. The street is named for Robert Morris Jr., often referred to as the financier of the Revolutionary War. At the north end of the street sits the Robert Morris Inn, Morris’ one-time home. As an historic figure, Morris doesn’t get the accolades or notoriety that George Washington, Benjamin Franklin, or Thomas Jefferson got, but his contributions to the young nation are substantial, and his story is worth telling. “When his namesake was still a toddler, the senior Robert Morris shipped out to the New World, dispatched by his employers to Oxford, a small trading port at the mouth of the Tred Avon River on Maryland’s Eastern Shore,” wrote Charles Rappleye in his biography, Robert Morris: Financier of the American Revolution. The younger Morris was born in Liverpool, England, in January 1734. His father moved to Oxford in 1738 and was a successful tobacco trader. Rappleye explains: “Over the course of a decade (Morris, Sr.) came to dominate commercial life

in Oxford, and helped to raise the port to a prominent position on the Chesapeake … When his son reached 13 years of age, Morris sent for him to join him in America. Young Robert arrived sometime in 1747 and lived brief ly in Oxford. He stayed in the handsome woodframe house his father maintained on the town’s main street.” The younger Morris was sent to Philadelphia to study, and became an apprentice at a shipping and