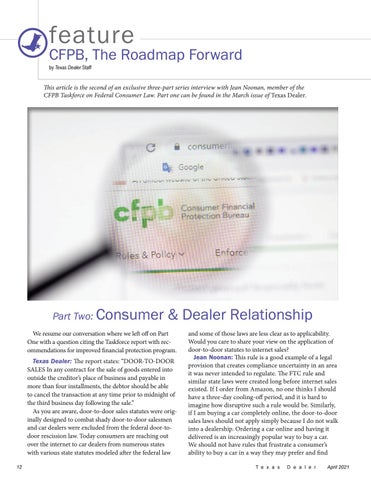 This article is the second of an exclusive three-part series interview with Jean Noonan, member of the CFPB Taskforce on Federal Consumer Law. Part one can be found in the March issue of Texas Dealer.

We resume our conversation where we left off on Part One with a question citing the Taskforce report with recommendations for improved financial protection program. Texas Dealer: The report states: “DOOR-TO-DOOR SALES In any contract for the sale of goods entered into outside the creditor’s place of business and payable in more than four installments, the debtor should be able to cancel the transaction at any time prior to midnight of the third business day following the sale.” As you are aware, door-to-door sales statutes were originally designed to combat shady door-to-door salesmen and car dealers were excluded from the federal door-todoor rescission law. Today consumers are reaching out over the internet to car dealers from numerous states with various state statutes modeled after the federal law 12

and some of those laws are less clear as to applicability. Would you care to share your view on the application of door-to-door statutes to internet sales? Jean Noonan: This rule is a good example of a legal provision that creates compliance uncertainty in an area it was never intended to regulate. The FTC rule and similar state laws were created long before internet sales existed. If I order from Amazon, no one thinks I should have a three-day cooling-off period, and it is hard to imagine how disruptive such a rule would be. Similarly, if I am buying a car completely online, the door-to-door sales laws should not apply simply because I do not walk into a dealership. Ordering a car online and having it delivered is an increasingly popular way to buy a car. We should not have rules that frustrate a consumer’s ability to buy a car in a way they may prefer and find T e x a s 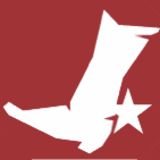