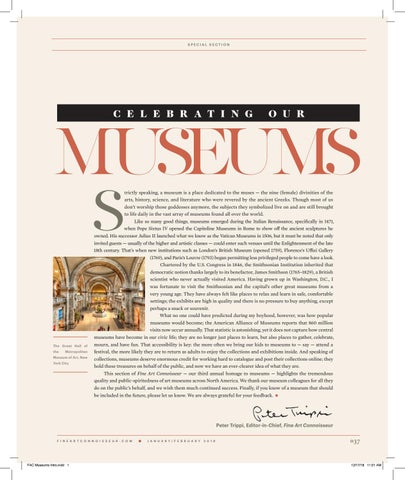 The Great Hall of the

trictly speaking, a museum is a place dedicated to the muses — the nine (female) divinities of the arts, history, science, and literature who were revered by the ancient Greeks. Though most of us don’t worship those goddesses anymore, the subjects they symbolized live on and are still brought to life daily in the vast array of museums found all over the world. Like so many good things, museums emerged during the Italian Renaissance, specifically in 1471, when Pope Sixtus IV opened the Capitoline Museums in Rome to show off the ancient sculptures he owned. His successor Julius II launched what we know as the Vatican Museums in 1506, but it must be noted that only invited guests — usually of the higher and artistic classes — could enter such venues until the Enlightenment of the late 18th century. That’s when new institutions such as London’s British Museum (opened 1759), Florence’s Uffizi Gallery (1769), and Paris’s Louvre (1793) began permitting less privileged people to come have a look. Chartered by the U.S. Congress in 1846, the Smithsonian Institution inherited that democratic notion thanks largely to its benefactor, James Smithson (1765–1829), a British scientist who never actually visited America. Having grown up in Washington, D.C., I was fortunate to visit the Smithsonian and the capital’s other great museums from a very young age. They have always felt like places to relax and learn in safe, comfortable settings; the exhibits are high in quality and there is no pressure to buy anything, except perhaps a snack or souvenir. What no one could have predicted during my boyhood, however, was how popular museums would become; the American Alliance of Museums reports that 860 million visits now occur annually. That statistic is astonishing, yet it does not capture how central museums have become in our civic life; they are no longer just places to learn, but also places to gather, celebrate, mourn, and have fun. That accessibility is key: the more often we bring our kids to museums to — say — attend a festival, the more likely they are to return as adults to enjoy the collections and exhibitions inside. And speaking of collections, museums deserve enormous credit for working hard to catalogue and post their collections online; they hold these treasures on behalf of the public, and now we have an ever-clearer idea of what they are. This section of Fine Art Connoisseur — our third annual homage to museums — highlights the tremendous quality and public-spiritedness of art museums across North America. We thank our museum colleagues for all they do on the public’s behalf, and we wish them much continued success. Finally, if you know of a museum that should be included in the future, please let us know. We are always grateful for your feedback.

MAY Ongoing through May 5 Outsiders: The Inside Story of Folk Art, Blowing Rock Art &amp; History Museum, NC

Located along the iconic San Antonio River Walk, the Briscoe Western Art Museum proudly presents the Night of Artists Exhibition, Live Auction &amp; Sale. Featuring over 280 works, including paintings and sculpture from 80 of the country’s top Western artists, this 18th annual event is not to be missed. Jeremy Winborg, Beauty of the Desert, Oil, 40” x 25”

ON VIEW AT THE BRUCE BURIED TREASURES OF THE SILK ROAD

MASTERPIECES FROM THE MUSEUM OF CARTOON ART January 26–April 20, 2019

M A RC H 21‒23, 2 019 Join us at The Russell: An Exhibition and Sale to Benefit the C.M. Russell Museum. The Russell is widely recognized as one of the most prestigious and fun western art events in the world. It is set to impress once again, oﬀering competitive bidding for significant works by highlyacclaimed historic and contemporary Western artists.

Going to the Sun: The Plein Air Painters of America Paint Glacier National Park May 31 – August 3, 2019 The Plein Air Painters of America, the original society of outdoor painters, are seasoned plein air painters and considered some of the best teachers of the genre today. Members share works from their Fall 2018 paint out in Glacier National Park.

Hear the Whistle Blow: Art of the Railway

Painters and mixed media artists, Linda Hendrickson, Shelle Lindholm and Sheri Trepina discovered their natural connection to mark making while painting together. Their combined body of work highlights the unique diversity and versatility in mark making and emphasizes this technique as a fundamental element of creating art.

This major exhibit of fine art, artifacts and ephemera focuses on the railway and its importance as part of America and the West. The exhibit will include 35 to 40 original fine art images depicting trains, crew and track workers, country depots, majestic bridges, prairie and mountains, and other iconic railway scenes, from both historic and contemporary artists across America.

Richard Buswell: What They Left Behind

April 18 – June 22, 2019 Richard Buswell’s photographs of commonplace objects, presented in isolation absent their typical surroundings, interfere with our comprehension, forcing us to look again rather than rely on our unconscious minds to process what we see. His stark, simple images help us penetrate the superficial appearance of objects from Montana’s past to contemplate the complex meanings that their histories and presence convey.

Leyendecker and the Golden Age of American Illustration Fall 2019

Reynolda is a rare gem among the nation’s arts and cultural institutions and historic greenspaces. The centerpiece of the 180 acre estate, Reynolda House Museum of American Art, presents changing exhibitions and a renowned collection in an incomparable setting: the original 1917 interiors of tobacco baron R.J. Reynolds’s country home. Take your time, there’s a lot to discover at Reynolda.