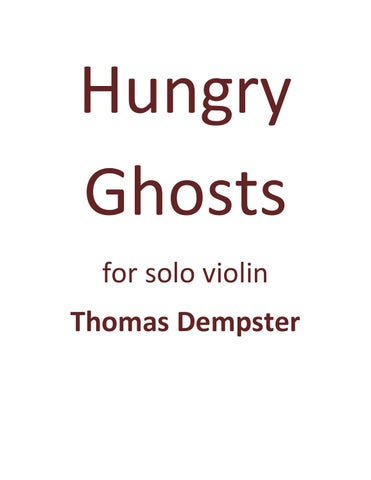 Hungry Ghosts Program notes I have always had a deep fascination with the supernatural, particularly spirits of the undead, not-quite-dead, and just-past-living that reside in central Europe, sub-Saharan Africa, and East Asia. I selected five notorious or infamous (or, at least, somewhat well-known) ghosts (or spirit entities) arising from Chinese mythologies and, without exotifying the folk sources or borrowing from Chinese music, have created five interrelated character pieces that to my ears typify the five ghosts – at least their personalities, their thoughts, their physical embodiments – and their abilities and trickeries. I. Gui Shu: Spirits that dwell in trees. These tricksters confuse travelers by randomly appearing, usually taking the forms of trees. This movement is more of a dialog between uncertain travelers and the occasional Gui Shu that appears when the sojourner forgets that they shouldn’t look upon a tree at night… II. Gui Po: This ghost takes the form of a kindly old woman, helpful and endearing, perhaps magical. Yet, even as this ghost is a caretaker, we must hold fear for her power, despite the grace and wisdom she brings unseen into this world. For some Gui Po can appear as witches and cast destruction upon the living. III. Jin Tong Yu Nu: The Golden Lad and Jade Maiden. The “beautiful couple,” the starcrossed lovers, created as paper dolls that are set aflame, their ashes and spirits soaring toward the heavens. IV. Wu Tou Gui: This is a headless ghost who roams aimlessly, constantly lost, constantly confused, wandering down roads, carrying their chopped-off heads in their hands. Sometimes, Wu Tou Gui approach travelers asking if they have seen their heads, forgetting that their heads are always in their hands, or at least flung over a shoulder in a sack. Absent-minded, indeed. V. Jiang Shi: My favorite ghost from Chinese myth, this bizarre cross between a vampire and a zombie that hops (not lurching or flying) around as a stiffened corpse trying to consume the life essence of the living. This reanimated corpse is indeed terrifying on multiple levels – the obvious desire to kill the living; and, moreover, the less-obvious desire of the spirit, the soul of the Jiang Shi, to escape and find final peace.

This is a three-second pause. Others common in the work are 2” or 1”. Often interchanged with fermatas with a notation for duration of pause.

An unmeasured ricochet, such that the bow’s natural acceleration is reflected by the notation. (NB – Measured ricochets are relatively rare in the piece)

Vary the vibrato width from nearly still (least wavy) to most wild (greatest amplitude). A somewhat wide, approximately 2/3 of a tone vibrato – not too fast – is desired here.

Maintain the lower pitch as double-stopped, but make a glissando downward, slowly, from the initial to the terminal pitch. It is ok if the sound dies away or the niente is reached before, in this case, arriving upon the C on the A string. This is a ghost sighing.

Rapid tremolo between the notated pitches. Bold line determines that tremolo should continue for the duration stated prior to pitch changes. (In this case, 3 seconds.) When this notation is used, approximate total timing for preceding tremolos is given at the end of each system in parentheses. Bold lines will occasionally appear as arrows.

In this context, the diamond-head designates that the finger should only touch the string, yet not go all the way down to the fingerboard. This creates a gossamer, whispering, occasionally-harmonic pitch system. The parenthesized note above the staff designates an approximate duration for the tremolo.

A snap pizzicato with a slow glissando.

Simply put, hold onto the flagged/beamed pitch a little longer before beginning the tremolo. Performer may choose to follow the tempo designations most recently placed in movement if they wish.

LaurĂŠ (here) or ricochet playing where the terminal pitch arrives through a glissando (designated as such by line). Exact pitches are debatable; emphasize crunchy quarter tones when possible.

Similar to the tremolando notation discussed above.

for solo violin (in manuscript)