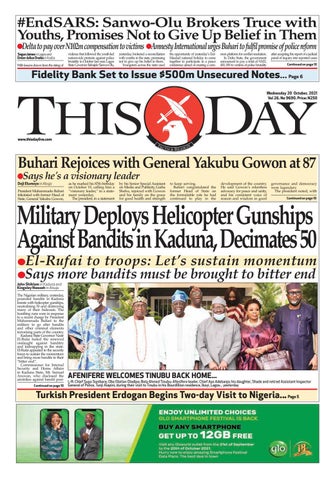 #EndSARS: Sanwo-Olu Brokers Truce with Youths, Promises Not to Give Up Belief in Them Delta to pay over N102m compensation to victims Amnesty International urges Buhari to fulfil promise of police reform

yesterday, brokered a reconciliation with youths in the state, promising not to give up his belief in them. Youngsters across the state used

mon platform for conflict resolution. In Delta State, the government announced to pay a total of N102, 450, 000 to victims of police brutality

as he marked his 87th birthday on October 19, calling him a “visionary leader,” in a statement yesterday. The president, in a statement

by his Senior Special Assistant on Media and Publicity, Garba Shehu, rejoiced with Gowon and his family on the grace for good health and strength

to keep serving. Buhari congratulated the former Head of State on the formidable role he had continued to play in the

development of the country. He said Gowon’s relentless advocacy for peace and unity, and his consistent voice of reason and wisdom in good

governance and democracy were legendary. The president noted, with Continued on page 10

Military Deploys Helicopter Gunships Against Bandits in Kaduna, Decimates 50 El-Rufai to troops: Let’s sustain momentum Says more bandits must be brought to bitter end John Shiklam in Kaduna and Kingsley Nwezeh in Abuja The Nigerian military, yesterday, pounded bandits in Kaduna forests with helicopter gunships, neutralising 50 and destroying many of their hideouts. The bombing runs were in response to a recent charge by President Muhammadu Buhari to the military to go after bandits and other criminal elements terrorising parts of the country. Kaduna State Governor Nasir El-Rufai hailed the renewed onslaught against banditry and kidnapping in the state. El-Rufai appealed to the security forces to sustain the momentum and bring more bandits to their “bitter end”. Commissioner for Internal Security and Home Affairs in Kaduna State, Mr. Samuel Aruwan, who disclosed the airstrikes against bandit posiContinued on page 10 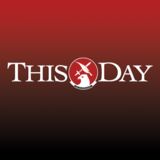