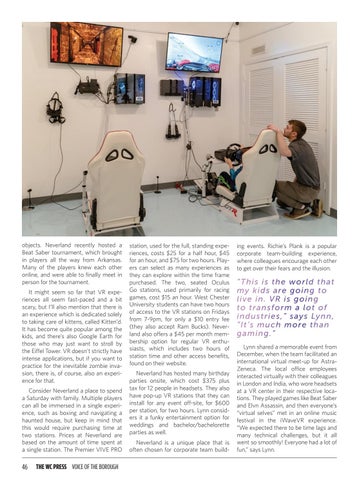 objects. Neverland recently hosted a Beat Saber tournament, which brought in players all the way from Arkansas. Many of the players knew each other online, and were able to finally meet in person for the tournament. It might seem so far that VR experiences all seem fast-paced and a bit scary, but I’ll also mention that there is an experience which is dedicated solely to taking care of kittens, called Kitten’d. It has become quite popular among the kids, and there’s also Google Earth for those who may just want to stroll by the Eiffel Tower. VR doesn’t strictly have intense applications, but if you want to practice for the inevitable zombie invasion, there is, of course, also an experience for that. Consider Neverland a place to spend a Saturday with family. Multiple players can all be immersed in a single experience, such as boxing and navigating a haunted house, but keep in mind that this would require purchasing time at two stations. Prices at Neverland are based on the amount of time spent at a single station. The Premier VIVE PRO

THE WC PRESS VOICE OF THE BOROUGH

station, used for the full, standing experiences, costs $25 for a half hour, $45 for an hour, and $75 for two hours. Players can select as many experiences as they can explore within the time frame purchased. The two, seated Oculus Go stations, used primarily for racing games, cost $15 an hour. West Chester University students can have two hours of access to the VR stations on Fridays from 7-9pm, for only a $10 entry fee (they also accept Ram Bucks). Neverland also offers a $45 per month membership option for regular VR enthusiasts, which includes two hours of station time and other access benefits, found on their website. Neverland has hosted many birthday parties onsite, which cost $375 plus tax for 12 people in headsets. They also have pop-up VR stations that they can install for any event off-site, for $600 per station, for two hours. Lynn considers it a funky entertainment option for weddings and bachelor/bachelorette parties as well. Neverland is a unique place that is often chosen for corporate team build-

ing events. Richie’s Plank is a popular corporate team-building experience, where colleagues encourage each other to get over their fears and the illusion.

“ T h i s i s t h e w o rl d that m y k i d s a re g o i ng to l i v e i n. V R i s g o i ng t o t ra ns fo rm a l ot of i nd u s t ri e s , ” s ays Ly nn, “ I t ’ s m u c h m o re t han g a m i ng . ” Lynn shared a memorable event from December, when the team facilitated an international virtual meet-up for AstraZeneca. The local office employees interacted virtually with their colleagues in London and India, who wore headsets at a VR center in their respective locations. They played games like Beat Saber and Elvn Assassin, and then everyone’s “virtual selves” met in an online music festival in the iWaveVR experience. “We expected there to be time lags and many technical challenges, but it all went so smoothly! Everyone had a lot of fun,” says Lynn.