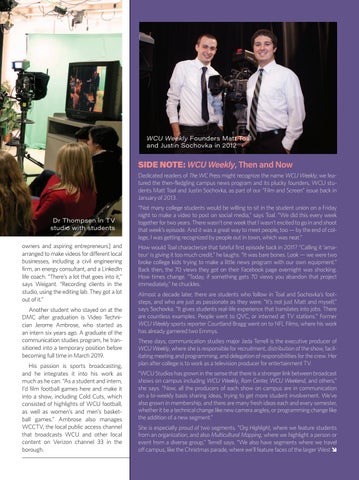 SIDE NOTE: WCU Weekly, Then and Now Dedicated readers of The WC Press might recognize the name WCU Weekly; we featured the then-fledgling campus news program and its plucky founders, WCU students Matt Toal and Justin Sochovka, as part of our “Film and Screen” issue back in January of 2013.

D r T h o m p s e n in T V s tu d io w ith s tu d e nt s owners and aspiring entrepreneurs] and arranged to make videos for different local businesses, including a civil engineering firm, an energy consultant, and a LinkedIn life coach. “There’s a lot that goes into it,” says Weigant. “Recording clients in the studio, using the editing lab. They got a lot out of it.” Another student who stayed on at the DMC after graduation is Video Technician Jerome Ambrose, who started as an intern six years ago. A graduate of the communication studies program, he transitioned into a temporary position before becoming full time in March 2019. His passion is sports broadcasting, and he integrates it into his work as much as he can. “As a student and intern, I’d film football games here and make it into a show, including Cold Cuts, which consisted of highlights of WCU football, as well as women’s and men’s basketball games.” Ambrose also manages WCCTV, the local public access channel that broadcasts WCU and other local content on Verizon channel 33 in the borough.

“Not many college students would be willing to sit in the student union on a Friday night to make a video to post on social media,” says Toal. “We did this every week together for two years. There wasn’t one week that I wasn’t excited to go in and shoot that week’s episode. And it was a great way to meet people, too — by the end of college, I was getting recognized by people out in town, which was neat.” How would Toal characterize that fateful first episode back in 2011? “Calling it ‘amateur’ is giving it too much credit,” he laughs. “It was bare bones. Look — we were two broke college kids trying to make a little news program with our own equipment.” Back then, the 70 views they got on their Facebook page overnight was shocking. How times change. “Today, if something gets 70 views you abandon that project immediately,” he chuckles. Almost a decade later, there are students who follow in Toal and Sochovka’s footsteps, and who are just as passionate as they were. “It’s not just Matt and myself,” says Sochovka. “It gives students real-life experience that translates into jobs. There are countless examples. People went to QVC, or interned at TV stations.” Former WCU Weekly sports reporter Courtland Bragg went on to NFL Films, where his work has already garnered two Emmys. These days, communication studies major Jada Terrell is the executive producer of WCU Weekly, where she is responsible for recruitment, distribution of the show, facilitating meeting and programming, and delegation of responsibilities for the crew. Her plan after college is to work as a television producer for entertainment TV. “WCU Studios has grown in the sense that there is a stronger link between broadcast shows on campus including WCU Weekly, Ram Center, WCU Weekend, and others,” she says. “Now, all the producers of each show on campus are in communication on a bi-weekly basis sharing ideas, trying to get more student involvement. We’ve also grown in membership, and there are many fresh ideas each and every semester, whether it be a technical change like new camera angles, or programming change like the addition of a new segment.” She is especially proud of two segments. “Org Highlight, where we feature students from an organization, and also Multicultural Mapping, where we highlight a person or event from a diverse group,” Terrell says. “We also have segments where we travel off campus, like the Christmas parade, where we’ll feature faces of the larger West 