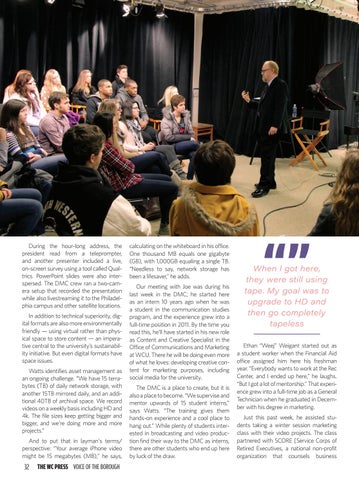 During the hour-long address, the president read from a teleprompter, and another presenter included a live, on-screen survey using a tool called Qualtrics. PowerPoint slides were also interspersed. The DMC crew ran a two-camera setup that recorded the presentation while also livestreaming it to the Philadelphia campus and other satellite locations. In addition to technical superiority, digital formats are also more environmentally friendly — using virtual rather than physical space to store content — an imperative central to the university’s sustainability initiative. But even digital formats have space issues. Watts identifies asset management as an ongoing challenge. “We have 15 terrabytes (TB) of daily network storage, with another 15TB mirrored daily, and an additional 40TB of archival space. We record videos on a weekly basis including HD and 4k. The file sizes keep getting bigger and bigger, and we’re doing more and more projects.” And to put that in layman's terms/ perspective: “Your average iPhone video might be 15 megabytes (MB),” he says,

THE WC PRESS VOICE OF THE BOROUGH

calculating on the whiteboard in his office. One thousand MB equals one gigabyte (GB), with 1,000GB equaling a single TB. “Needless to say, network storage has been a lifesaver,” he adds. Our meeting with Joe was during his last week in the DMC; he started here as an intern 10 years ago when he was a student in the communication studies program, and the experience grew into a full-time position in 2011. By the time you read this, he'll have started in his new role as Content and Creative Specialist in the Office of Communications and Marketing at WCU. There he will be doing even more of what he loves: developing creative content for marketing purposes, including social media for the university. The DMC is a place to create, but it is also a place to become. “We supervise and mentor upwards of 15 student interns,” says Watts. “The training gives them hands-on experience and a cool place to hang out.” While plenty of students interested in broadcasting and video production find their way to the DMC as interns, there are other students who end up here by luck of the draw.

W he n I g ot he re , the y w e re s till us ing ta p e . M y g o a l wa s to up g ra d e to H D a nd the n g o c om p le te ly ta p e le s s Ethan “Weej” Weigant started out as a student worker when the Financial Aid office assigned him here his freshman year. “Everybody wants to work at the Rec Center, and I ended up here,” he laughs. “But I got a lot of mentorship.” That experience grew into a full-time job as a General Technician when he graduated in December with his degree in marketing. Just this past week, he assisted students taking a winter session marketing class with their video projects. The class partnered with SCORE [Service Corps of Retired Executives, a national non-profit organization that counsels business