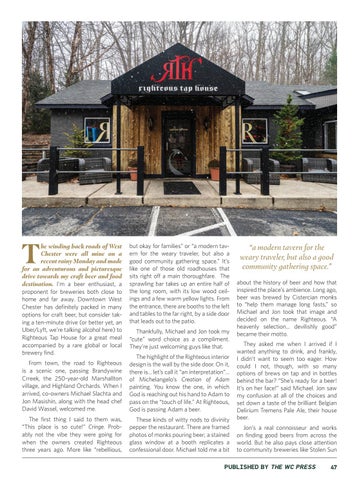 he winding back roads of West Chester were all mine on a recent rainy Monday and made for an adventurous and picturesque drive towards my craft beer and food destination. I’m a beer enthusiast, a proponent for breweries both close to home and far away. Downtown West Chester has definitely packed in many options for craft beer, but consider taking a ten-minute drive (or better yet, an Uber/Lyft, we’re talking alcohol here) to Righteous Tap House for a great meal accompanied by a rare global or local brewery find.

but okay for families” or “a modern tavern for the weary traveler, but also a good community gathering space.” It’s like one of those old roadhouses that sits right off a main thoroughfare. The sprawling bar takes up an entire half of the long room, with its low wood ceilings and a few warm yellow lights. From the entrance, there are booths to the left and tables to the far right, by a side door that leads out to the patio. Thankfully, Michael and Jon took my “cute” word choice as a compliment. They’re just welcoming guys like that.

From town, the road to Righteous is a scenic one, passing Brandywine Crreek, the 250-year-old Marshallton village, and Highland Orchards. When I arrived, co-owners Michael Slachta and Jon Masishin, along with the head chef David Wassel, welcomed me.

The highlight of the Righteous interior design is the wall by the side door. On it, there is... let’s call it “an interpretation”... of Michelangelo’s Creation of Adam painting. You know the one, in which God is reaching out his hand to Adam to pass on the “touch of life.” At Righteous, God is passing Adam a beer.

The first thing I said to them was, “This place is so cute!” Cringe. Probably not the vibe they were going for when the owners created Righteous three years ago. More like “rebellious,

These kinds of witty nods to divinity pepper the restaurant. There are framed photos of monks pouring beer; a stained glass window at a booth replicates a confessional door. Michael told me a bit

“a modern tavern for the weary traveler, but also a good community gathering space.” about the history of beer and how that inspired the place’s ambience. Long ago, beer was brewed by Cistercian monks to “help them manage long fasts,” so Michael and Jon took that image and decided on the name Righteous. “A heavenly selection... devilishly good” became their motto. They asked me when I arrived if I wanted anything to drink, and frankly, I didn’t want to seem too eager. How could I not, though, with so many options of brews on tap and in bottles behind the bar? “She’s ready for a beer! It’s on her face!” said Michael. Jon saw my confusion at all of the choices and set down a taste of the brilliant Belgian Delirium Tremens Pale Ale, their house beer. Jon’s a real connoisseur and works on finding good beers from across the world. But he also pays close attention to community breweries like Stolen Sun