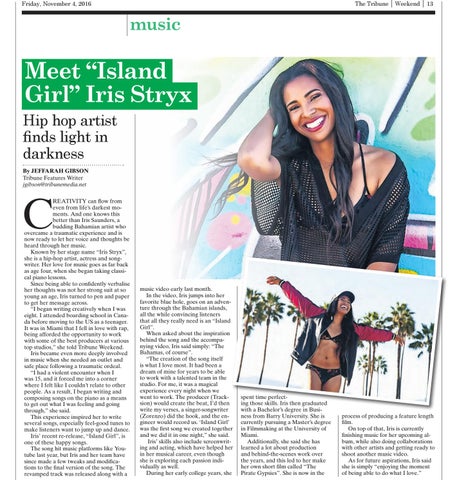 REATIVITY can flow from even from life’s darkest moments. And one knows this better than Iris Saunders, a budding Bahamian artist who overcame a traumatic experience and is now ready to let her voice and thoughts be heard through her music. Known by her stage name “Iris Stryx”, she is a hip-hop artist, actress and songwriter. Her love for music goes as far back as age four, when she began taking classical piano lessons. Since being able to confidently verbalise her thoughts was not her strong suit at so young an age, Iris turned to pen and paper to get her message across. “I began writing creatively when I was eight. I attended boarding school in Canada before moving to the US as a teenager. It was in Miami that I fell in love with rap, being afforded the opportunity to work with some of the best producers at various top studios,” she told Tribune Weekend. Iris became even more deeply involved in music when she needed an outlet and safe place following a traumatic ordeal. “I had a violent encounter when I was 15, and it forced me into a corner where I felt like I couldn’t relate to other people. As a result, I began writing and composing songs on the piano as a means to get out what I was feeling and going through,” she said. This experience inspired her to write several songs, especially feel-good tunes to make listeners want to jump up and dance. Iris’ recent re-release, “Island Girl”, is one of these happy songs. The song hit music platforms like Youtube last year, but Iris and her team have since made a few tweaks and modifications to the final version of the song. The revamped track was released along with a

music video early last month. In the video, Iris jumps into her favorite blue hole, goes on an adventure through the Bahamian islands, all the while convincing listeners that all they really need is an “Island Girl”. When asked about the inspiration behind the song and the accompanying video, Iris said simply: “The Bahamas, of course”. “The creation of the song itself is what I love most. It had been a dream of mine for years to be able to work with a talented team in the studio. For me, it was a magical experience every night when we went to work. The producer (Tracksion) would create the beat, I’d then write my verses, a singer-songwriter (Zorenzo) did the hook, and the engineer would record us. ‘Island Girl’ was the first song we created together and we did it in one night,” she said. Iris’ skills also include screenwriting and acting, which have helped her in her musical career, even though she is exploring each passion individually as well. During her early college years, she

spent time perfecting those skills. Iris then graduated with a Bachelor’s degree in Business from Barry University. She is currently pursuing a Master’s degree in Filmmaking at the University of Miami. Additionally, she said she has learned a lot about production and behind-the-scenes work over the years, and this led to her make her own short film called “The Pirate Gypsies”. She is now in the

process of producing a feature length film. On top of that, Iris is currently finishing music for her upcoming album, while also doing collaborations with other artists and getting ready to shoot another music video. As for future aspirations, Iris said she is simply “enjoying the moment of being able to do what I love.”