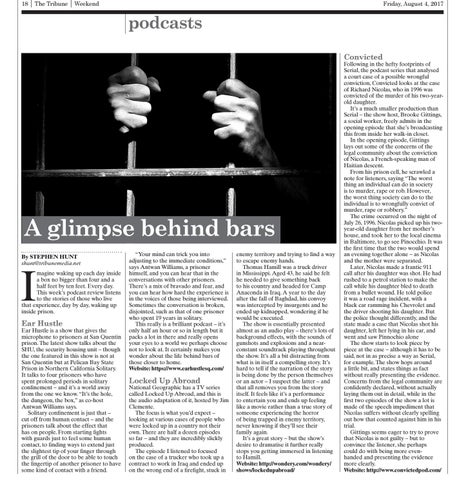 A glimpse behind bars By STEPHEN HUNT shunt@tribunemedia.net

magine waking up each day inside a box no bigger than four and a half feet by ten feet. Every day. This week’s podcast review listens to the stories of those who live that experience, day by day, waking up inside prison.

Ear Hustle is a show that gives the microphone to prisoners at San Quentin prison. The latest show talks about the SHU, the security housing unit – though the one featured in this show is not at San Quentin but at Pelican Bay State Prison in Northern California Solitary. It talks to four prisoners who have spent prolonged periods in solitary confinement – and it’s a world away from the one we know. “It’s the hole, the dungeon, the box,” as co-host Antwan Williams says. Solitary confinement is just that – cut off from human contact – and the prisoners talk about the effect that has on people. From starting fights with guards just to feel some human contact, to finding ways to extend just the slightest tip of your finger through the grill of the door to be able to touch the fingertip of another prisoner to have some kind of contact with a friend.

“Your mind can trick you into adjusting to the immediate conditions,” says Antwan Williams, a prisoner himself, and you can hear that in the conversations with other prisoners. There’s a mix of bravado and fear, and you can hear how hard the experience is in the voices of those being interviewed. Sometimes the conversation is broken, disjointed, such as that of one prisoner who spent 19 years in solitary. This really is a brilliant podcast – it’s only half an hour or so in length but it packs a lot in there and really opens your eyes to a world we perhaps choose not to look at. It certainly makes you wonder about the life behind bars of those closer to home. Website: https://www.earhustlesq.com/

National Geographic has a TV series called Locked Up Abroad, and this is the audio adaptation of it, hosted by Jim Clemente. The focus is what you’d expect – looking at various cases of people who were locked up in a country not their own. There are half a dozen episodes so far – and they are incredibly slickly produced. The episode I listened to focused on the case of a trucker who took up a contract to work in Iraq and ended up on the wrong end of a firefight, stuck in

enemy territory and trying to find a way to escape enemy hands. Thomas Hamill was a truck driver in Mississippi. Aged 43, he said he felt he needed to give something back to his country and headed for Camp Anaconda in Iraq. A year to the day after the fall of Baghdad, his convoy was intercepted by insurgents and he ended up kidnapped, wondering if he would be executed. The show is essentially presented almost as an audio play – there’s lots of background effects, with the sounds of gunshots and explosions and a nearconstant soundtrack playing throughout the show. It’s all a bit distracting from what is in itself a compelling story. It’s hard to tell if the narration of the story is being done by the person themselves or an actor – I suspect the latter – and that all removes you from the story itself. It feels like it’s a performance to entertain you and ends up feeling like a movie rather than a true story of someone experiencing the horror of being trapped in enemy territory, never knowing if they’ll see their family again. It’s a great story – but the show’s desire to dramatise it further really stops you getting immersed in listening to Hamill. Website: http://wondery.com/wondery/ shows/lockedupabroad/

Following in the hefty footprints of Serial, the podcast series that analysed a court case of a possible wrongful conviction, Convicted looks at the case of Richard Nicolas, who in 1996 was convicted of the murder of his two-yearold daughter. It’s a much smaller production than Serial – the show host, Brooke Gittings, a social worker, freely admits in the opening episode that she’s broadcasting this from inside her walk-in closet. In the opening episode, Gittings lays out some of the concerns of the legal community about the conviction of Nicolas, a French-speaking man of Haitian descent. From his prison cell, he scrawled a note for listeners, saying “The worst thing an individual can do in society is to murder, rape or rob. However, the worst thing society can do to the individual is to wrongfully convict of murder, rape or robbery.” The crime occurred on the night of July 26, 1996. Nicolas picked up his twoyear-old daughter from her mother’s house, and took her to the local cinema in Baltimore, to go see Pinocchio. It was the first time that the two would spend an evening together alone – as Nicolas and the mother were separated. Later, Nicolas made a frantic 911 call after his daughter was shot. He had rushed to a petrol station to make the call while his daughter bled to death from a bullet wound. He told police it was a road rage incident, with a black car ramming his Chevrolet and the driver shooting his daughter. But the police thought differently, and the state made a case that Nicolas shot his daughter, left her lying in his car, and went and saw Pinnochio alone The show starts to look piece by piece at the case – although it has to be said, not in as precise a way as Serial, for example. The show hops around a little bit, and states things as fact without really presenting the evidence. Concerns from the legal community are confidently declared, without actually laying them out in detail, while in the first two episodes of the show a lot is made of the speech impediment that Nicolas suffers without clearly spelling out how that counted against him in his trial. Gittings seems eager to try to prove that Nicolas is not guilty – but to convince the listener, she perhaps could do with being more evenhanded and presenting the evidence more clearly. Website: http://www.convictedpod.com/