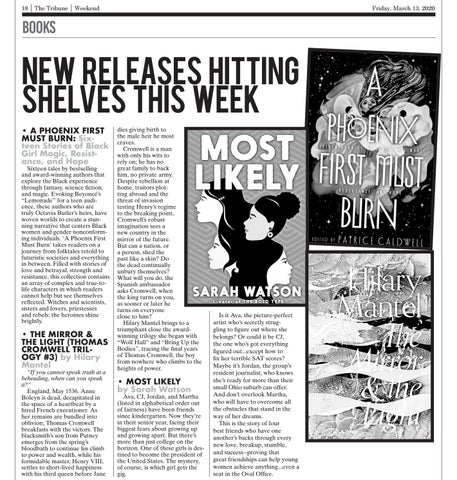 Sixteen tales by bestselling and award-winning authors that explore the Black experience through fantasy, science fiction, and magic. Evoking Beyoncé’s “Lemonade” for a teen audience, these authors who are truly Octavia Butler’s heirs, have woven worlds to create a stunning narrative that centers Black women and gender nonconforming individuals. ‘A Phoenix First Must Burn’ takes readers on a journey from folktales retold to futuristic societies and everything in between. Filled with stories of love and betrayal, strength and resistance, this collection contains an array of complex and true-tolife characters in which readers cannot help but see themselves reflected. Witches and scientists, sisters and lovers, priestesses and rebels: the heroines shine brightly.

• THE MIRROR & THE LIGHT (THOMAS CROMWELL TRILOGY #3) by Hilary Mantel  “If you cannot speak truth at a beheading, when can you speak it?” England, May 1536. Anne Boleyn is dead, decapitated in the space of a heartbeat by a hired French executioner. As her remains are bundled into oblivion, Thomas Cromwell breakfasts with the victors. The blacksmith’s son from Putney emerges from the spring’s bloodbath to continue his climb to power and wealth, while his formidable master, Henry VIII, settles to short-lived happiness with his third queen before Jane

dies giving birth to the male heir he most craves. Cromwell is a man with only his wits to rely on; he has no great family to back him, no private army. Despite rebellion at home, traitors plotting abroad and the threat of invasion testing Henry’s regime to the breaking point, Cromwell’s robust imagination sees a new country in the mirror of the future. But can a nation, or a person, shed the past like a skin? Do the dead continually unbury themselves? What will you do, the Spanish ambassador asks Cromwell, when the king turns on you, as sooner or later he turns on everyone close to him? Hilary Mantel brings to a triumphant close the awardwinning trilogy she began with “Wolf Hall” and “Bring Up the Bodies”, tracing the final years of Thomas Cromwell, the boy from nowhere who climbs to the heights of power.

• MOST LIKELY by Sarah Watson

Ava, CJ, Jordan, and Martha (listed in alphabetical order out of fairness) have been friends since kindergarten. Now they’re in their senior year, facing their biggest fears about growing up and growing apart. But there’s more than just college on the horizon. One of these girls is destined to become the president of the United States. The mystery, of course, is which girl gets the gig.

Is it Ava, the picture-perfect artist who’s secretly struggling to figure out where she belongs? Or could it be CJ, the one who’s got everything figured out...except how to fix her terrible SAT scores? Maybe it’s Jordan, the group’s resident journalist, who knows she’s ready for more than their small Ohio suburb can offer. And don’t overlook Martha, who will have to overcome all the obstacles that stand in the way of her dreams. This is the story of four best friends who have one another’s backs through every new love, breakup, stumble, and success--proving that great friendships can help young women achieve anything...even a seat in the Oval Office.