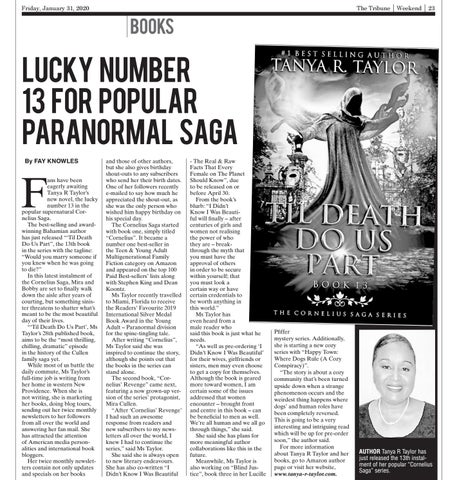 ans have been eagerly awaiting Tanya R Taylor’s new novel, the lucky number 13 in the popular supernatural Cornelius Saga. The best-selling and awardwinning Bahamian author has just released “‘Til Death Do Us Part”, the 13th book in the series with the tagline: “Would you marry someone if you knew when he was going to die?” In this latest instalment of the Cornelius Saga, Mira and Bobby are set to finally walk down the aisle after years of courting, but something sinister threatens to shatter what’s meant to be the most beautiful day of their lives. “‘Til Death Do Us Part’, Ms Taylor’s 28th published book, aims to be the “most thrilling, chilling, dramatic” episode in the history of the Cullen family saga yet. While most of us battle the daily commute, Ms Taylor’s full-time job is writing from her home in western New Providence. When she is not writing, she is marketing her books, doing blog tours, sending out her twice monthly newsletters to her followers from all over the world and answering her fan mail. She has attracted the attention of American media personalities and international book bloggers. Her twice monthly newsletters contain not only updates and specials on her books

and those of other authors, but she also gives birthday shout-outs to any subscribers who send her their birth dates. One of her followers recently e-mailed to say how much he appreciated the shout-out, as she was the only person who wished him happy birthday on his special day. The Cornelius Saga started with book one, simply titled “Cornelius”. It became a number one best-seller in the Teen & Young Adult Multigenerational Family Fiction category on Amazon and appeared on the top 100 Paid Best-sellers’ lists along with Stephen King and Dean Koontz. Ms Taylor recently travelled to Miami, Florida to receive the Readers’ Favourite 2019 International Silver Medal Book Award in the Young Adult – Paranormal division for the spine-tingling tale. After writing “Cornelius”, Ms Taylor said she was inspired to continue the story, although she points out that the books in the series can stand alone. The second book, “Cornelius’ Revenge” came next, featuring a now grown-up version of the series’ protagonist, Mira Cullen. “After ‘Cornelius’ Revenge’ I had such an awesome response from readers and new subscribers to my newsletters all over the world, I knew I had to continue the series,” said Ms Taylor. She said she is always open to new literary endeavours. She has also co-written “I Didn’t Know I Was Beautiful

- The Real & Raw Facts That Every Female on The Planet Should Know”, due to be released on or before April 30. From the book’s blurb: “I Didn’t Know I Was Beautiful will finally – after centuries of girls and women not realising the power of who they are – breakthrough the myth that you must have the approval of others in order to be secure within yourself; that you must look a certain way or have certain credentials to be worth anything in this world.” Ms Taylor has even heard from a male reader who said this book is just what he needs. “As well as pre-ordering ‘I Didn’t Know I Was Beautiful’ for their wives, girlfriends or sisters, men may even choose to get a copy for themselves. Although the book is geared more toward women, I am certain some of the issues addressed that women encounter – brought front and centre in this book – can be beneficial to men as well. We’re all human and we all go through things,” she said. She said she has plans for more meaningful author collaborations like this in the future. Meanwhile, Ms Taylor is also working on “Blind Justice”, book three in her Lucille

Pfiffer mystery series. Additionally, she is starting a new cozy series with “Happy Town: Where Dogs Rule (A Cozy Conspiracy)”. “The story is about a cozy community that’s been turned upside down when a strange phenomenon occurs and the weirdest thing happens where dogs’ and human roles have been completely reversed. This is going to be a very interesting and intriguing read which will be up for pre-order soon,” the author said. For more information about Tanya R Taylor and her books, go to Amazon author page or visit her website, www.tanya-r-taylor.com.