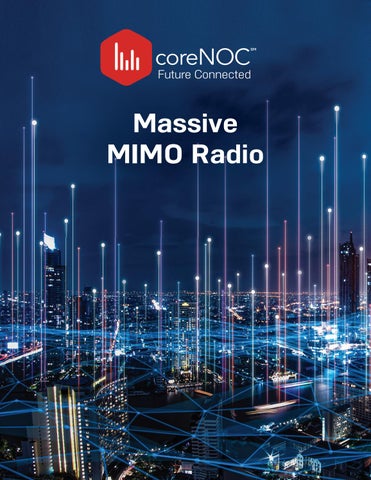 ABOUT Massive MIMO The coreNOC/Leax Massive MIMO radio allows operators to get much faster speeds and additional capacity on their existing 2.5GHz 4G spectrum. This Massive MIMO radio is software upgradable to 5G which will be released at the end of 2021. This gives operators flexibility today to meet customer expectations and a simple path to 5G. The coreNOC/Leax radio utilizes near real-time digital beamforming technology, enabling the targeted use of spectrum. Current mobile networks dumbly share a single pool of spectrum out to all users in the vicinity, which results in a performance bottleneck in densely populated areas. With Massive MIMO and beamforming that’s handled far more smartly and efficiently, it will improve system capacity and spectral efficiency. Massive MIMO’s ability to serve multiple users – and multiple devices – simultaneously within a condensed area while maintaining fast data rates and consistent performance makes it the perfect fit.

Massive MIMO is a basic building block of so-called 4.9G, which will bring LTE network performance to near 5G levels.