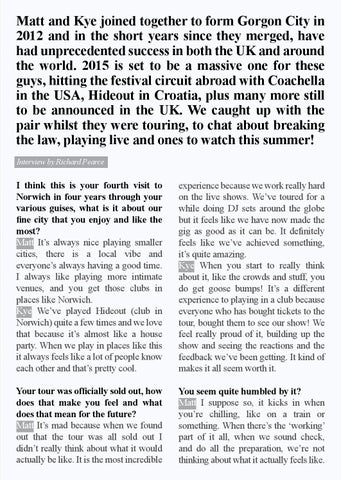 Matt and Kye joined together to form Gorgon City in 2012 and in the short years since they merged, have had unprecedented success in both the UK and around the world. 2015 is set to be a massive one for these guys, hitting the festival circuit abroad with Coachella in the USA, Hideout in Croatia, plus many more still to be announced in the UK. We caught up with the pair whilst they were touring, to chat about breaking the law, playing live and ones to watch this summer! Interview by Richard Pearce

I think this is your fourth visit to Norwich in four years through your various guises, what is it about our ﬁne city that you enjoy and like the most? Matt It’s always nice playing smaller cities, there is a local vibe and everyone’s always having a good time. I always like playing more intimate venues, and you get those clubs in places like Norwich. Kye We’ve played Hideout (club in Norwich) quite a few times and we love that because it’s almost like a house party. When we play in places like this it always feels like a lot of people know each other and that’s pretty cool.

experience because we work really hard on the live shows. We’ve toured for a while doing DJ sets around the globe but it feels like we have now made the gig as good as it can be. It deﬁnitely feels like we’ve achieved something, it’s quite amazing. Kye When you start to really think about it, like the crowds and stuff, you do get goose bumps! It’s a different experience to playing in a club because everyone who has bought tickets to the tour, bought them to see our show! We feel really proud of it, building up the show and seeing the reactions and the feedback we’ve been getting. It kind of makes it all seem worth it.

Your tour was ofﬁcially sold out, how does that make you feel and what does that mean for the future? Matt It’s mad because when we found out that the tour was all sold out I didn’t really think about what it would actually be like. It is the most incredible

You seem quite humbled by it? Matt I suppose so, it kicks in when you’re chilling, like on a train or something. When there’s the ‘working’ part of it all, when we sound check, and do all the preparation, we’re not thinking about what it actually feels like. 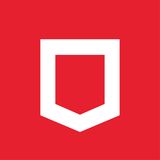