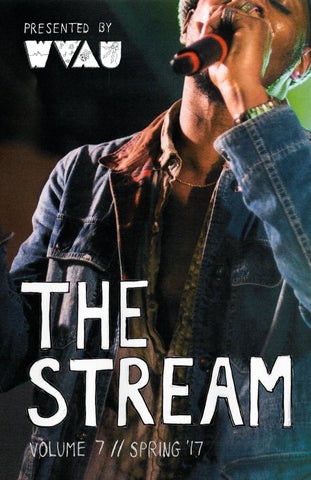 Wise Words From the GMs

It’s an interesting feeling contributing something as a third-party to a publication that you helped usher into this world. Putting together photoshop spreads my freshman year, I never really thought that I’d eventually writing the introductory passages to its latest iteration. I see how much bigger and livelier and stronger the zine staff has grown and it truly fills me with hope and excitement for the future of this mini-mag. This petite-periodical. This small serial. In your hands you hold a paper-based polymer of the blood, sweat, and tears of a semester’s worth of hard work. I hope that you’ll enjoy the content in these pages as much I fondly reminisce on my time as a zine staffer. I love you all, goodbye forever, enjoy the zine, support student media, WVAU FOREVER. xoxo Luke Takuya “Actually Just a Cicada Nymph in Disguise” Palermo The first time I listened to WVAU was junior year of high school. My friend Elise who went to AU had graduated from my high school a year before and had a radio show called Mermaid Teaparty, and I stumbled across the link while scrolling through Facebook. I clicked through and found the button for the stream, which then redirected me to an iTunes radio station, and I was immediately interested. When I visited AU I made sure to ask the tour guides where the radio station was, and once I was accepted into AU I frantically checked the Class of 2017 Facebook page for any link or news of how to get involved. I even made sure that I wore a band t-shirt to the first general interest meeting so that the people in charge thought I was cool enough to join (just an aside you are all cool enough our organization is really just made up of a bunch of goofballs like me who want to have a fun time and will love you for who you are so YES YOU ARE COOL ENOUGH). And LO AND BEHOLD I am here right now four years later bringing you our latest copy of The Stream, our lovely zine (thank you thank you thank you for reading!!!). WVAU is, at its core, a place where people can just be themselves and share the music they are passionate about with the world. Shows come and go, but the essence of the station is always the same. WVAU is a radio station, a website, and a fan-frickin-tastic zine (which started my freshman year and Luke was in the inaugural staff), but it’s really the people in the organization that have kept me going and that made me want to be its head since the moment I stepped into my first DJ meeting. WVAU has been one of the only constants throughout my college career, and has gotten me through some of the toughest times of my life. I’ve bled for this station and the people in it (I sliced my finger on a falafel catering container at Prom it wasn’t that bad), and this zine is a physical representation of what we have to offer AU and the world. So take it in, read it cover-to-cover, take another copy and give it to your mom, or put it in an envelope and send it to your best friend who is studying abroad. It’s out of our hands and into yours, and we hope you like it as much as we do. And if at the end of reading this zine you decide you want to get involved, we would love to welcome you into our big ol 150 person family. RUSH WVAU WVAU 4 LYFE 1000 YEARS WVAU XOXO Sean “The Motherfucker” Carolan

Trementina — 810 RIYL: Cocteau Twins, Frankie Cosmos, Eskimeaux, Porches, Hope Sandoval &amp; The Warm Inventions, Alvvays, Sjowgren, Makthaverskan TRY# 3,1,2,7 Trementina create music for lucid dreaming. It’s an intense, yet melancholic conjuring by art students and skaters from the damp forests of Valdivia, Chile, where the rainfall creates faded polaroids out of daily life. Valdivian shoegaze emerges from the fissures of their homeland. Isolated from urban static, Trementina has created a dizzying symphony that drowns you with noise, hallucinatory guitars, and beauty among chaos — which can be felt in the ethereal vocals of Vanessa Cea.

I WAS SO EXCITED FOR GOLDLINK TO COME TO AU. I’ve been a fan of his music for a while now and practically cried when I got the email from SUB and WVAU. (Shoutout to Sean for being a GOD and letting a few of my friends and I set up the Tav and take a picture with him after the show!) DJ Ayes Cold opened the show with some awesome remixes to get the crowd pumped. Ciscero took the stage shortly after with his whole crew and got the crowd hyped. He doesn’t have a lot of solo songs, so he played bits and pieces of music he will hopefully be releasing soon, as well as other tracks he was featured on. Then Goldlink hit the stage and was AMAZING. The crowd was so hyped and going all-out to every track he performed. He played diﬀerent tracks oﬀ And After That, We Didn’t Talk including Dance on Me, Late Night, Unique, and Palm Trees. He also performed his single Fall In Love (where Ciscero joined him onstage and doused the audience in water) and hinted at a few tracks oﬀ his recently released album, At What Cost (WHICH I HIGHLY HIGHLY RECOMMEND YOU LISTEN TO ASAP). He threw a hell of a show and I can’t wait until he tours again in the DMV area because I will deﬁnitely be there. He knows how to perform and it’s the kind of vibes you never want to end.

photo courtesy of: The Eagle

I was a bit apprehensive going to this show because I have never heard of Princess Nokia and was talked into it by my friend, but damn it was so worth it. We ended up going to the later show, which basically started at midnight (way past my bedtime). DJ Ayes Cold started us oﬀ with some sick remixes of popular jams; I’m already a fan of her style and she does a good job getting the crowd warmed up. The next opener was a DMV area band called Give Us More Power aka GUMP, who had an interesting garage band + freestyle R&amp;B vibes with some jazz inﬂuences. Deﬁnitely one of the more interesting sounds, but the band was fun to watch on such a small stage (the lead singer was almost decapitated by a guitar- it was a time to be alive). Then the lovely sunﬂower of a human being took the stage and high key blew my mind. She was literally wearing a Pokemon t shirt, dad sneaker and short shorts (and she was turning 25 the next day). Princess Nokia played her more popular hits, like Kitana, Tomboy, and Brown Girl Blues. She also played us some new music from her album 1992 which is going to be re-released with more songs soon! She was so high energy and clearly loved her fans so much, the entire crowd was just great vibes to be surrounded by at 2 am. At one point, she literally stopped the show so we could pray for the girls that recently went missing in DC (I’m an atheist and I found this to be adorable). My friend and I were so close to the stage too, that we got to hug her. One of the more intimate concerts I’ve been to and I deﬁnitely have to recommend going to see Princess Nokia!

the planet is dying, it’s fine a playlist by suah cheong These songs actually have nothing to do with environmental conservation (I just happen to think that they’re all really good) but hey– it’s always a good time to remember that we’re slowly destroying the Earth! Yep, the planet is dying! Everything is clearly okay! As you listen to this carefully curated playlist, I want you to think about the rapidly declining bee population. To quote my favorite Cards Against Humanity card, “bees?” Why are they dying so quickly? What would life be like without them? And, most importantly, what can you do to help?

Where’d All the Time Go? by Dr. Dog Somedays by Regina Spektor Neighborhood #1 (Tunnels) by Arcade Fire Tear It Down by Spoon There She Goes by the La’s Jesus of Suburbia by Green Day Hey Now by The Regrettes Fool by Frankie Cosmos Small Poppies by Courtney Barnett Wake Up Alone by Amy Winehouse DUCKWORTH. by Kendrick Lamar Something by The Beatles Passing Out Pieces by Mac Demarco Dead Legs by Active Bird Community Foundations by Kate Nash Criminal by Fiona Apple Above Control by Warpaint Neighbors by J. Cole My Willing Heart by James Blake Half Gate by Grizzly Bear Honey by Best Coast West Coast by Coconut Records Hero by Family of the Year

Anand “NandaPanda” Srinivasan Sophomore with a radio show about hip hop. I just joined the zine staff this semester but don’t let this distract you from the fact that in 1998, The Undertaker threw Mankind off Hell In A Cell, and plummeted 16 ft through an announcer’s table.

Elly “Ellykah Badu” Mendelson is a hyphy gal from San Francisco, yaddamean? Find me in overalls in SOC

Nana “Tina Belcher” Gongadze You know, that chick with the fake red hair. Also an art history/PR major from the DC area

Sam “Samu” Campbell likes heels, heels don’t like her, can be found napping during all hours of the day and the only religious experience she’s had was at a concert

Suah “struggle bus” Cheong is a tortilla, usually a corn tortilla but also sometimes made with a wheat tortilla, which is filled with cheese and then grilled. 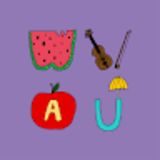