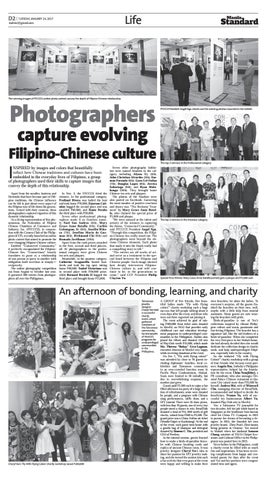 NSPIRED by images and colors that beautifully reflect how Chinese traditions and cultures have been embedded in the everyday lives of Filipinos, a group of photographers used their skills to capture images that convey the depth of this relationship. Apart from the noodles, lanterns and fireworks that have become part of Filipino traditions, the Chinese influence can be felt in just about every aspect of the Filipino way of life down the generations. Armed with their cameras, these photographers captured vignettes of this dynamic relationship. As a living representation of this phenomenon, the Federation of Filipino Chinese Chambers of Commerce and Industry, Inc. (FFCCCII), in cooperation with the Camera Club of the Philippines (CCP), recently launched an online photo contest that aimed to promote the ever-changing Filipino-Chinese culture. Entitled “Connected Community,” it perfectly encapsulated the FilipinoChinese ties. “Connections” loosely translates to guan xi, a relationship of one person or party to another with obligation built overtime or simply— reciprocity. The online photography competition ran from August to October last year. It garnered 300 entries from photographers all over the Philippines.

Seven other photography hobbyists were named finalists in the category including Alyssa Uy (4th), John Christian Alvariño (5th), Emman Foronda (6th), Gaea Lei Osilao (7th), Douglas Lopez (8th), Jerrica Sabariaga (9th), and Ryan Malabonga (10th). They brought home Chinese tea sets and plaques. The photos of the finalists were also posted on Facebook. Garnering the most number of positive reactions and shares was “The Rockstar Treatment’ by Mary Grace Anne Batalla, who claimed the special prize of P5,000 and plaque. “We were amazed at the talent and artistry of the winners in capturing the theme, ‘Connected Community’,” said FFCCCII President Angel Ngu. “Through this competition, the Filipino-Chinese ties really stood out. The photographers went beyond the obvious Chinese elements. Each photo that made it into the finals really had a compelling story to tell.” “The entries are all works of art, and serve as a testament to the special bond between the Filipino and Chinese people. Each image showed how deeply interwoven FilipinoChinese culture is, and will continue to be, in the generations to come,” said CCP President Philip Clayton Yu.

The top 3 winners in the Professional category

The top 3 winners in the Amateur category

An afternoon of bonding, learning, and charity Taiwanese jewelry designer Cheryl Yee held a successful charity event, which gathered members of the Taiwanese community, for the benefit of MovEd’s programs for underprivileged communities in the Philippines.

A GROUP of five friends, five beautiful ladies made “Fly with flying colors!” charity workshop such a huge success that left people talking about it even days after the event, and those who were not there regretted not joining it. The event achieved its goal of raising P100,000 from ticket sales donated to MovEd, an NGO that provides early childhood care and education development programs in underprivileged communities in the Philippines. Hasbro also joined the efforts and donated 118 sets of Play-Doh worth P12,000, which made Ma. Theresa “Bukay” Urra-Lagman, executive director of MovEd very happy while receiving donations at the event. On Dec 7, “Fly with flying colors!” was attended by close to 70 guests including diplomats’ families, local celebrities and Taiwanese community in an over-crowded function room in Pacific Plaza Condominium, Makati. Seats were limited to 50 initially, but due to overwhelming response, the number just grew. Guests paid P2,500 each to enjoy a fun filled afternoon tea party of a large selection of refreshments; some were donated by people, and a program with Chinese song performances, raffle draw, and a DIY tutorial. There were 35 draw prizes, with less than 70 guests, one of every two people stood a chance to win. BreadTalk donated a total of P15, 000 worth of gift checks, valued from P500 to P3,500. The grand prize was a China Airline air ticket (Manila-Taipei or Kaohsiung). At the end of the event, each guest went home with a goodie bag of shampoo and detergent donated by Simeon C. Tiu, president and CEO of Peerless. In the tutorial session, guests learned how to make a birds-of-paradise bracelet with Chinese knotting cords and replica of ancient Chinese coins. It was jewelry designer Cheryl Yee’s idea to share her passion for DIY jewelry making, and she turned the session into such a fun activity that even guys at the event were happy and willing to make their

own bracelets, let alone the ladies. To everyone’s surprise, all the guests finished the bracelets on their own, well, maybe with a little help from tutorial assistants. Many guests are now wearing the bracelets with pride. Birds-of-paradise is one of Yee’s collections inspired by vibrant Philippine culture and warm, passionate and fun-loving Filipinos. The bracelet has a signature tail, like the tail feathers of a birds-of-paradise. When she completed the very first piece in her Makati home, she had already decided then she would dedicate the collection design to charity work, and help underprivileged Filipinos, especially kids in the country. So she initiated “Fly with Flying Colors!” charity workshop with a group of four friends who became event partners: Angela Hsu, Sotheby’s Philippine representative, helped lay the foundation for the event. Chim Namjildorj, a PR consultant, who also manages Oriental Palace Chinese restaurant in Quezon City raised more than P25,000 by herself. Andrea Wei, wife of Winward Chu, managing director of BreadTalk, recommended and helped to decide the beneficiary. Yvonne Yu, wife of successful toy businessman Albert Yu, donated Play-Doh sets to MovEd. Yee, a Taiwanese TV journalist for two decades, left her job while based in Singapore as the Southeast Asia bureau chief for China TV Company in 2012 to pursue her dream of becoming a designer. In 2015, she founded her own jewelry brand, Zhen Pearl. Zhen means being genuine in Chinese. Yee moved to Makati when her husband Samson Chang, minister of TECO (Taipei Economic and Cultural Office in the Philippines) was posted here in 2013. Never before in the Philippines, could a charity event be filled with so much fun and inspirations. It has been receiving compliments from happy and contented guests for days after the event and Yee and her partners were congratulated time and again.

The digital edition of Manila Standard: A nationally circulated newspaper published daily in the Philippines since February 1987.