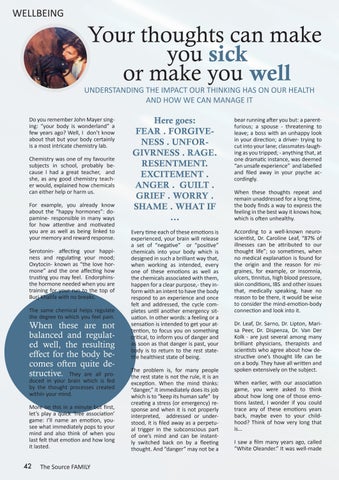 Your thoughts can make you sick or make you well

UNDERSTANDING THE IMPACT OUR THINKING HAS ON OUR HEALTH AND HOW WE CAN MANAGE IT Do you remember John Mayer singing: “your body is wonderland” a few years ago? Well, I don’t know about that but your body certainly is a most intricate chemistry lab. Chemistry was one of my favourite subjects in school, probably because I had a great teacher, and she, as any good chemistry teacher would, explained how chemicals can either help or harm us. For example, you already know about the “happy hormones”: dopamine- responsible in many ways for how attentive and motivated you are as well as being linked to your memory and reward response. Serotonin- affecting your happiness and regulating your mood; Oxytocin- known as “the love hormone” and the one affecting how trusting you may feel. Endorphinsthe hormone needed when you are training for your run to the top of Burj Khalifa with no breaks. The same chemical helps regulate the degree to which you feel pain.

When these are not balanced and regulated well, the resulting effect for the body becomes often quite destructive. They are all produced in your brain which is fed by the thought processes created within your mind. More on this in a minute but first, let’s play a quick ‘free association’ game: I’ll name an emotion, yousee what immediately pops to your mind and also think of when you last felt that emotion and how long it lasted.

bear running after you but: a parentfurious; a spouse - threatening to leave; a boss with an unhappy look in your direction; a driver- trying to cut into your lane; classmates-laughing as you tripped; - anything that, at one dramatic instance, was deemed “an unsafe experience” and labelled and filed away in your psyche accordingly.

Every time each of these emotions is experienced, your brain will release a set of “negative” or “positive” chemicals into your body which is designed in such a brilliant way that, when working as intended, every one of these emotions as well as the chemicals associated with them, happen for a clear purpose,- they inform with an intent to have the body respond to an experience and once felt and addressed, the cycle completes until another emergency situation. In other words: a feeling or a sensation is intended to get your attention, to focus you on something critical, to inform you of danger and as soon as that danger is past, your body is to return to the rest statethe healthiest state of being.

According to a well-known neuroscientist, Dr. Caroline Leaf, “87% of illnesses can be attributed to our thought life”; so sometimes, when no medical explanation is found for the origin and the reason for migraines, for example, or insomnia, ulcers, tinnitus, high blood pressure, skin conditions, IBS and other issues that, medically speaking, have no reason to be there, it would be wise to consider the mind-emotion-body connection and look into it.

The problem is, for many people the rest state is not the rule, it is an exception. When the mind thinks: “danger,” it immediately does its job which is to “keep its human safe” by creating a stress (or emergency) response and when it is not properly interpreted, addressed or understood, it is filed away as a perpetual trigger in the subconscious part of one’s mind and can be instantly switched back on by a fleeting thought. And “danger” may not be a

When these thoughts repeat and remain unaddressed for a long time, the body finds a way to express the feeling in the best way it knows how, which is often unhealthy.

Dr. Leaf, Dr. Sarno, Dr. Lipton, Marisa Peer, Dr. Dispenza, Dr. Van Der Kolk - are just several among many brilliant physicians, therapists and scientists who agree about how destructive one’s thought life can be on a body. They have all written and spoken extensively on the subject. When earlier, with our association game, you were asked to think about how long one of those emotions lasted, I wonder if you could trace any of these emotions years back, maybe even to your childhood? Think of how very long that is... I saw a film many years ago, called “White Oleander.” It was well-made 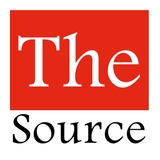 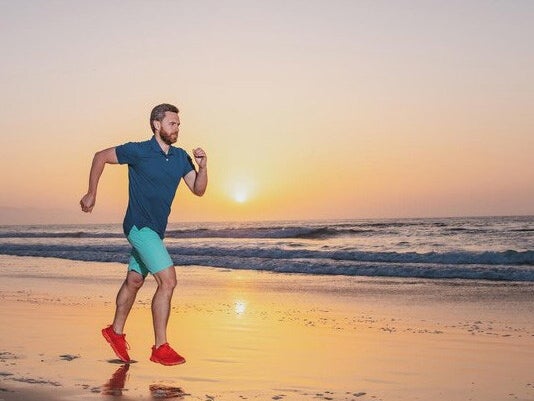 Fitness over 40 Is it too late?