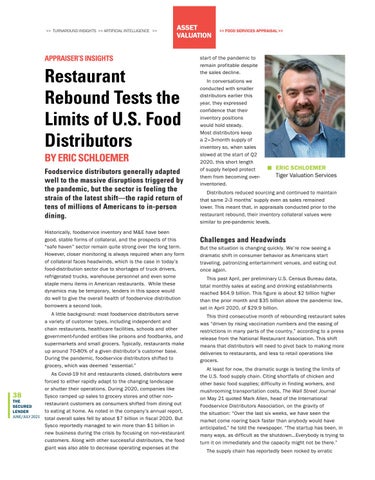 Restaurant Rebound Tests the Limits of U.S. Food Distributors BY ERIC SCHLOEMER Foodservice distributors generally adapted well to the massive disruptions triggered by the pandemic, but the sector is feeling the strain of the latest shift—the rapid return of tens of millions of Americans to in-person dining. Historically, foodservice inventory and M&amp;E have been good, stable forms of collateral, and the prospects of this “safe haven” sector remain quite strong over the long term. However, closer monitoring is always required when any form of collateral faces headwinds, which is the case in today’s food-distribution sector due to shortages of truck drivers, refrigerated trucks, warehouse personnel and even some staple menu items in American restaurants. While these dynamics may be temporary, lenders in this space would do well to give the overall health of foodservice distribution borrowers a second look. A little background: most foodservice distributors serve a variety of customer types, including independent and chain restaurants, healthcare facilities, schools and other government-funded entities like prisons and foodbanks, and supermarkets and small grocers. Typically, restaurants make up around 70-80% of a given distributor’s customer base. During the pandemic, foodservice distributors shifted to grocery, which was deemed “essential.” As Covid-19 hit and restaurants closed, distributors were forced to either rapidly adapt to the changing landscape or shutter their operations. During 2020, companies like 38 Sysco ramped up sales to grocery stores and other nonTHE restaurant customers as consumers shifted from dining out SECURED to eating at home. As noted in the company’s annual report, LENDER JUNE/JULY 2021 total overall sales fell by about $7 billion in fiscal 2020. But Sysco reportedly managed to win more than $1 billion in new business during the crisis by focusing on non-restaurant customers. Along with other successful distributors, the food giant was also able to decrease operating expenses at the

start of the pandemic to remain profitable despite the sales decline. In conversations we conducted with smaller distributors earlier this year, they expressed confidence that their inventory positions would hold steady. Most distributors keep a 2–3-month supply of inventory so, when sales slowed at the start of Q2 2020, this short length ERIC SCHLOEMER of supply helped protect Tiger Valuation Services them from becoming over- inventoried. Distributors reduced sourcing and continued to maintain that same 2-3 months’ supply even as sales remained lower. This meant that, in appraisals conducted prior to the restaurant rebound, their inventory collateral values were similar to pre-pandemic levels.

Challenges and Headwinds But the situation is changing quickly. We’re now seeing a dramatic shift in consumer behavior as Americans start traveling, patronizing entertainment venues, and eating out once again. This past April, per preliminary U.S. Census Bureau data, total monthly sales at eating and drinking establishments reached $64.9 billion. This figure is about $2 billion higher than the prior month and $35 billion above the pandemic low, set in April 2020, of $29.9 billion. This third consecutive month of rebounding restaurant sales was “driven by rising vaccination numbers and the easing of restrictions in many parts of the country,” according to a press release from the National Restaurant Association. This shift means that distributors will need to pivot back to making more deliveries to restaurants, and less to retail operations like grocers. At least for now, the dramatic surge is testing the limits of the U.S. food supply chain. Citing shortfalls of chicken and other basic food supplies; difficulty in finding workers, and mushrooming transportation costs, The Wall Street Journal on May 21 quoted Mark Allen, head of the International Foodservice Distributors Association, on the gravity of the situation: “Over the last six weeks, we have seen the market come roaring back faster than anybody would have anticipated,” he told the newspaper. “The startup has been, in many ways, as difficult as the shutdown…Everybody is trying to turn it on immediately and the capacity might not be there.” The supply chain has reportedly been rocked by erratic 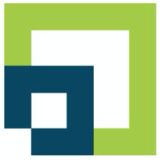