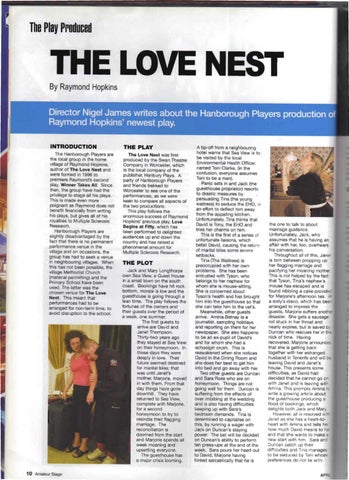 INTRODUCTION The Hanborough Players are the local group in the home village of Raymond Hopkins, author of The Love Nest and were formed in 1996 to premiere Raymond's second play, Winner Takes All. Since then , the group have had the privilege to stage all his plays. This is made even more poignant as Raymond does not benefit financially from writing his plays, but gives all of his royalties to Multiple Sclerosis Research. Hanborough Players are slightly disadvantaged by the fact that there is no permanent performance venue in the village and on occasions, the group has had to seek a venue in neighbouring villages. When this has not been possible, the village Methodist Church (material permitting) and the Primary School have been used. The latter was the chosen venue for The Love Nest. This meant that performances had to be arranged for non-term time, to avoid disruption to the SChool.

THE PLAY The Love Nest was first produced by the Swan Theatre Company in Worcester, which is the local company of the publisher, Hanbury Plays. A party of Hanborough Players and friends trekked to Worcester to see one of the performances, as we were keen to compare all aspects of the two productions. This play follows the enormous success of Raymond Hopkins' previous play, Love Begins at Fifty, which has been performed to delighted audiences up and down the country and has raised a phenomenal amount for Multiple Sclerosis Research.

THE PLOT Jack and Mary Longthorpe own Sea View, a Guest House in a small town on the south coast. Bookings have hit rock bottom , morale is low and the guesthouse is going through a lean time. The play follows the fortunes of the owners and their guests over the period of a week, one summer. The first guests to arrive are David and Janet Thompson. Thirty-two years ago they stayed at Sea View on their honeymoon. In those days they were deeply in love. Their future seemed destined for marital bliss ; that was until Janet's mother, Marjorie, moved in w ith them . From that day things have gone downhill. They have returned to Sea View, complete with Marjorie, for a second honeymoon to try to rekindle their flagging marriage. Tile reconciliation is doomed from the start and Marjorie spends all week moaning and upsetting everyone. The guest house has a major crisis looming.

A tip-off from a neighbouring hotel warns that Sea View is to be visited by the local Environmental Health Officer, named Toni Clarke, (in the confusion , everyone assumes Toni to be a man). Panic sets in and Jack (the guesthouse proprietor) resorts to drastic measures by persuading Tina (the young waitress) to seduce the EHO , in an effort to deflect him away from the appalling kitchen. Unfortunately, Tina thinks that David is Tony, the EHO and tries her charms on him. This is the first of a series of unfortunate liaisons, which befall David, causing the return of marital bliss some severe setbacks. Tina (The Waitress) is preoccupied with her own problems. She has been entrusted with Tyson , who belongs to her nephew for whom she is mouse-sitting. She is concerned about Tyson 's health and has brought him into the guesthouse so that she can take him to the vet 's. Meanwhile, other guests arrive. Amina Betnay is a journalist, sampling holidays and reporting on them for her newspaper. She also happens to be an ex- pupil of David's and for whom she had a schoolgirl crush. This is reawakened when she notices David in the Dining Room and she does her best to get him into bed and go away with her. Two other guests are Duncan and Sara Ross who are on honeymoon . Things are not going well for them . Duncan is suffering from the effects of over imbibing at the wedding and is also having difficulties keeping up with Sara's bedroom demands. Tina is determined to cap italise on this, by running a wager with Jack on Duncan's staying power. The bet will be decided on Duncan 's ability to perform ten press-ups at the end of the week. Sara pours her heart out to David, Marjorie having hinted sarcastically that he is

the one to talk to about marriage guidance. Unfortunately, Jack, who assumes that he is having an affair with her, too, overhears his conversation. Throughout all of th is, Jane! is torn between propping up her flagging marriage and pacifying her moaning mother Th is is not helped by the fact that Tyson, Tina's nephew 's mouse has escaped and is found nibbling a cake provid . for Marjorie's afternoon tea. a sixty 's disco, which has bee足 arranged to impress the guests, Marjorie suffers anot :足 disaster. She gets a sausage roll stuck in her throat and nearly expires, but is saved Duncan who rescues her in !t揃 o nick of time. Having recovered , Marjorie announc . that she is getting back together with her estranged husband in Tenerife and will b~ leaving David and Janet 's house. This presents some difficulties, as David had decided that he cannot go o' with Janet and is leaving wit~ Amina. This prompts Amina c write a glowing arti cle about the guesthouse producing a flood of bookings, which delights both Jack and Mar . However, all is reso lved WI' Janet as she has a heart-to足 heart with Amina and tells he how much David means to I'I,=, and that she wants to make' new start with him. Sara ana Duncan patch up their difficulties and Tina manages to be sedu ced by Toni WhOSE preferences do not lie with

The antics of Tyson -us to bemuse throughout ~ ti re play, resulting in 'her' = :::Ing ten baby mice in a rd in the ill-fated en and then escaping into ric of the guesthouse.

TING as important for the ; <; playing Jack and Mary -: be stereotypes of John nd Prunella Scales in - Towers. - ing The Love Nest was -- ,ely easy, as members of ;'cup sprang easily to - : when the play was first The cast consists of: ~ K LONGTHORPE (early o - a big thinker and an ~ _,.mist. Has mood ~ , does not always think he speaks.

.. ET THOMPSON (early - - Has been dominated by otller all her life. Smart, pokell , with a touch of "1Other 's snobbishness. _ not often show affection. -BJORIE BRAITHWAITE ~O 's) - Cantankerous ::;an , who thinks the world _s around her. Has ; -ons of wealth. • -Ilo ndriac. Thinks her .:~ er has married beneath

REHEARSALS The Love Nest has a fast and furious pace and is quite demanding on its actors. Having said that, there was no shortage of willingness from the cast to throw themselves into their roles. As there is no specific lead role, the parts are quite evenly spread in terms of lines. As with most productions, it is essential that books be discarded as soon as possible, as there is a lot of 'business ' that is hampered by books-in-hand, We were fortunate (!?) to have the author present at all' our rehearsals , so he could instruct us in exactly what he intended to happen at every juncture! Twelve weeks were allocated for rehearsals , as many of the cast have demanding jobs and they were unable to give it the intensive work that a shorter rehearsal period would require. It was, not easy directing and being In the production, so an associate director was used , so that the intricacies of the scenes in which I appeared could be directed from the front to ensure they were right. Only two rehearsals were possible on the set, once constructed, due to the restrictions of the school. This just gave enough time to sort out the technical aspects of lighting and sound and the workings of Tyson , the mouse. More rehearsals would have been a bonus.

STAGING The stage needed to be split into three areas. The main area is the Dining Room, flanked by the Kitchen and Hall. Cut­ away walls were used so that action in the side areas could be seen , with doorways from each into the Dining Room. It was helpful to have separate entrances for the front door and , for the remainder of the house; we used a short flight of stairs, We were fortunate that one of the cast was refurbishing her kitchen and we used her old fittings . Other fittings and furnishings were easily obtained , but should reflect the shabbiness and tackiness of tile guesthouse. The most challenging prop was Tyson the mouse, which has to traverse the stage on several occasions, We tried various alternatives, from a radio controlled mouse, to a mouse-covered clockwork Thomas the Tank engine on a track . The laller had to 'be abandoned as a) the owner, Hugo, cried incessantly at being parted from it and b) it travelled so slowly that the chase became ridiculOUS , as if in slow motion. Eventually, a weighted , furry mouse on fishing line was used. This could ensure that the speed was controlled, although it required someone on either end of it to pull it across the stage. We had contemplated the possibility of leaving Tyson to the imagination of the audience, but felt that this would take away a vital element of the play. The play did not require a complicated lighting plot, although we chose to dim the lights in areas that were not the centre of the action , so that other characters, still on set, did not detract from the main action.

COSTUMES Costumes did not present too much of a problem , apart from the sixties outfits. Its

surprising how much can be found in charity shops and in people 's lofts!

MUSIC The sixties hits can be found anywhere . You must remember that these are subject to performing rights restrictions and companies must check whether the venue is registered,

CONCLUSION The Love Nest is a most enjoyable play to rehearse and perform. Laughs came fasl and furious and the audience left feeling uplifted. It is an added bonus to use the names of people in the audience as potential guests on the telephone. It is particularly enjoyable to play the part of David, as he gets to kiss practically all the females in the cast (with the exception of Marjorie, thank goodness!). Not that this is ageist, but she IS such an objectionable character that you could never contemplate kissing her, even at Christmas. This play has a lot to offer. Non -stop humour, action throughout, twists and turns to the plot, good music and some poignant moments. Our , production was a resounding success. We filled the venue every night and even had to turn people away. All scripts, scores and libretti featured in 'The Play Produ ced' and 'The Musical Produced' can be obtained from

Music and scripts available for all.