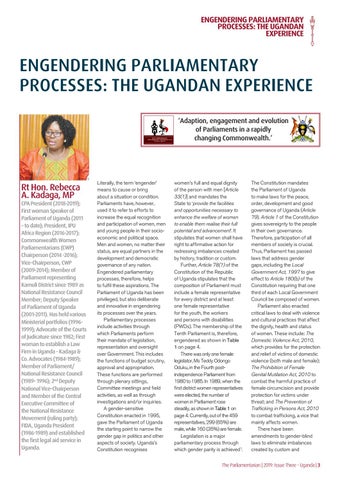 Literally, the term ‘engender’ means to cause or bring about a situation or condition. Parliaments have, however, used it to refer to efforts to increase the equal recognition and participation of women, men and young people in their socioeconomic and political space. Men and women, no matter their status, are equal partners in the development and democratic governance of any nation. Engendered parliamentary processes, therefore, helps to fulfil these aspirations. The Parliament of Uganda has been privileged, but also deliberate and innovative in engendering its processes over the years. Parliamentary processes include activities through which Parliaments perform their mandate of legislation, representation and oversight over Government. This includes the functions of budget scrutiny, approval and appropriation. These functions are performed through plenary sittings, Committee meetings and field activities, as well as through investigations and/or inquiries. A gender-sensitive Constitution enacted in 1995, gave the Parliament of Uganda the starting point to narrow the gender gap in politics and other aspects of society. Uganda’s Constitution recognises

women’s full and equal dignity of the person with men [Article 33(1)] and mandates the State to ‘provide the facilities and opportunities necessary to enhance the welfare of women to enable them realise their full potential and advancement’. It stipulates that women shall have right to affirmative action for redressing imbalances created by history, tradition or custom. Further, Article 78(1) of the Constitution of the Republic of Uganda stipulates that the composition of Parliament must include a female representative for every district and at least one female representative for the youth, the workers and persons with disabilities (PWDs). The membership of the Tenth Parliament is, therefore, engendered as shown in Table 1 on page 4. There was only one female legislator, Ms Teddy Odongo Oduku, in the Fourth postindependence Parliament from 1980 to 1985. In 1989, when the first district women representatives were elected, the number of women in Parliament rose steadily, as shown in Table 1 on page 4. Currently, out of the 459 representatives, 299 (65%) are male, while 160 (35%) are female. Legislation is a major parliamentary process through which gender parity is achieved1.

The Constitution mandates the Parliament of Uganda to make laws for the peace, order, development and good governance of Uganda (Article 79). Article 1 of the Constitution gives sovereignty to the people in their own governance. Therefore, participation of all members of society is crucial. Thus, Parliament has passed laws that address gender gaps, including the Local Government Act, 1997 to give effect to Article 180(b) of the Constitution requiring that one third of each Local Government Council be composed of women. Parliament also enacted critical laws to deal with violence and cultural practices that affect the dignity, health and status of women. These include: The Domestic Violence Act, 2010, which provides for the protection and relief of victims of domestic violence (both male and female); The Prohibition of Female Genital Mutilation Act, 2010 to combat the harmful practice of female circumcision and provide protection for victims under threat; and The Prevention of Trafficking in Persons Act, 2010 to combat trafficking, a vice that mainly affects women. There have been amendments to gender-blind laws to eliminate imbalances created by custom and