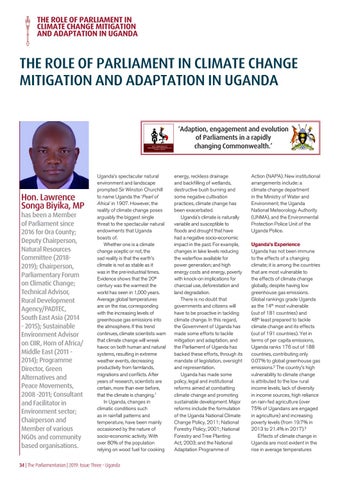 THE ROLE OF PARLIAMENT IN CLIMATE CHANGE MITIGATION AND ADAPTATION IN UGANDA ‘Adaption, engagement and evolution of Parliaments in a rapidly changing Commonwealth.’

Uganda’s spectacular natural environment and landscape prompted Sir Winston Churchill to name Uganda the ‘Pearl of Africa’ in 1907. However, the reality of climate change poses arguably the biggest single threat to the spectacular natural endowments that Uganda boasts of. Whether one is a climate change sceptic or not, the sad reality is that the earth’s climate is not as stable as it was in the pre-industrial times. Evidence shows that the 20th century was the warmest the world has seen in 1,000 years. Average global temperatures are on the rise, corresponding with the increasing levels of greenhouse gas emissions into the atmosphere. If this trend continues, climate scientists warn that climate change will wreak havoc on both human and natural systems, resulting in extreme weather events, decreasing productivity from farmlands, migrations and conflicts. After years of research, scientists are certain, more than ever before, that the climate is changing.1 In Uganda, changes in climatic conditions such as in rainfall patterns and temperature, have been mainly occasioned by the nature of socio-economic activity. With over 80% of the population relying on wood fuel for cooking

energy, reckless drainage and backfilling of wetlands, destructive bush burning and some negative cultivation practices, climate change has been exacerbated. Uganda’s climate is naturally variable and susceptible to floods and drought that have had a negative socio-economic impact in the past. For example, changes in lake levels reducing the waterflow available for power generation; and high energy costs and energy, poverty with knock-on implications for charcoal use, deforestation and land degradation. There is no doubt that governments and citizens will have to be proactive in tackling climate change. In this regard, the Government of Uganda has made some efforts to tackle mitigation and adaptation, and the Parliament of Uganda has backed these efforts, through its mandate of legislation, oversight and representation. Uganda has made some policy, legal and institutional reforms aimed at combatting climate change and promoting sustainable development. Major reforms include the formulation of the Uganda National Climate Change Policy, 2011; National Forestry Policy, 2001; National Forestry and Tree Planting Act, 2003; and the National Adaptation Programme of

Action (NAPA). New institutional arrangements include: a climate change department in the Ministry of Water and Environment; the Uganda National Meteorology Authority (UNMA), and the Environmental Protection Police Unit of the Uganda Police. Uganda’s Experience Uganda has not been immune to the effects of a changing climate; it is among the countries that are most vulnerable to the effects of climate change globally, despite having low greenhouse gas emissions. Global rankings grade Uganda as the 14th most vulnerable (out of 181 countries) and 48th least prepared to tackle climate change and its effects (out of 191 countries). Yet in terms of per capita emissions, Uganda ranks 176 out of 188 countries, contributing only 0.07% to global greenhouse gas emissions.2 The country’s high vulnerability to climate change is attributed to the low rural income levels, lack of diversity in income sources, high reliance on rain-fed agriculture (over 75% of Ugandans are engaged in agriculture) and increasing poverty levels (from 19.7% in 2013 to 21.4% in 2017).3 Effects of climate change in Uganda are most evident in the rise in average temperatures