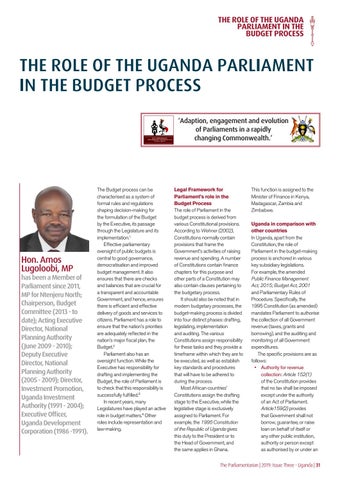 THE ROLE OF THE UGANDA PARLIAMENT IN THE BUDGET PROCESS

THE ROLE OF THE UGANDA PARLIAMENT IN THE BUDGET PROCESS ‘Adaption, engagement and evolution of Parliaments in a rapidly changing Commonwealth.’

The Budget process can be characterised as a system of formal rules and regulations shaping decision-making for the formulation of the Budget by the Executive, its passage through the Legislature and its implementation.1 Effective parliamentary oversight of public budgets is central to good governance, democratisation and improved budget management. It also ensures that there are checks and balances that are crucial for a transparent and accountable Government, and hence, ensures there is efficient and effective delivery of goods and services to citizens. Parliament has a role to ensure that the nation’s priorities are adequately reflected in the nation’s major fiscal plan, the Budget.2 Parliament also has an oversight function. While the Executive has responsibility for drafting and implementing the Budget, the role of Parliament is to check that this responsibility is successfully fulfilled.3 In recent years, many Legislatures have played an active role in budget matters.4 Other roles include representation and law-making.

Legal Framework for Parliament’s role in the Budget Process The role of Parliament in the budget process is derived from various Constitutional provisions. According to Wehner (2002), Constitutions normally contain provisions that frame the Government’s activities of raising revenue and spending. A number of Constitutions contain finance chapters for this purpose and other parts of a Constitution may also contain clauses pertaining to the budgetary process. It should also be noted that in modern budgetary processes, the budget-making process is divided into four distinct phases: drafting, legislating, implementation and auditing. The various Constitutions assign responsibility for these tasks and they provide a timeframe within which they are to be executed, as well as establish key standards and procedures that will have to be adhered to during the process. Most African countries’ Constitutions assign the drafting stage to the Executive, while the legislative stage is exclusively assigned to Parliament. For example, the 1995 Constitution of the Republic of Uganda gives this duty to the President or to the Head of Government, and the same applies in Ghana.

This function is assigned to the Minister of Finance in Kenya, Madagascar, Zambia and Zimbabwe. Uganda in comparison with other countries In Uganda, apart from the Constitution, the role of Parliament in the budget-making process is anchored in various key subsidiary legislations. For example, the amended Public Finance Management Act, 2015; Budget Act, 2001 and Parliamentary Rules of Procedure. Specifically, the 1995 Constitution (as amended) mandates Parliament to authorise the collection of all Government revenue (taxes, grants and borrowing), and the auditing and monitoring of all Government expenditures. The specific provisions are as follows: • Authority for revenue collection: Article 152(1) of the Constitution provides that no tax shall be imposed except under the authority of an Act of Parliament. Article159(2) provides that Government shall not borrow, guarantee, or raise loan on behalf of itself or any other public institution, authority or person except as authorised by or under an