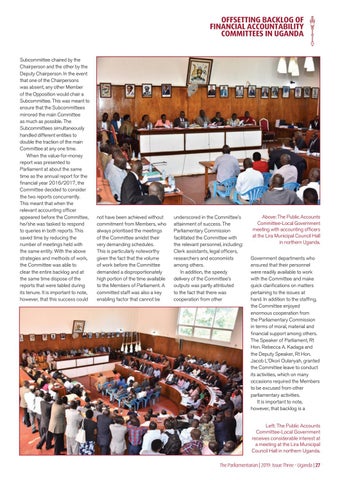 OFFSETTING BACKLOG OF FINANCIAL ACCOUNTABILITY COMMITTEES IN UGANDA Subcommittee chaired by the Chairperson and the other by the Deputy Chairperson. In the event that one of the Chairpersons was absent, any other Member of the Opposition would chair a Subcommittee. This was meant to ensure that the Subcommittees mirrored the main Committee as much as possible. The Subcommittees simultaneously handled different entities to double the traction of the main Committee at any one time. When the value-for-money report was presented to Parliament at about the same time as the annual report for the financial year 2016/2017, the Committee decided to consider the two reports concurrently. This meant that when the relevant accounting officer appeared before the Committee, he/she was tasked to respond to queries in both reports. This saved time by reducing the number of meetings held with the same entity. With the above strategies and methods of work, the Committee was able to clear the entire backlog and at the same time dispose of the reports that were tabled during its tenure. It is important to note, however, that this success could

not have been achieved without commitment from Members, who always prioritised the meetings of the Committee amidst their very demanding schedules. This is particularly noteworthy given the fact that the volume of work before the Committee demanded a disproportionately high portion of the time available to the Members of Parliament. A committed staff was also a key enabling factor that cannot be

underscored in the Committee’s attainment of success. The Parliamentary Commission facilitated the Committee with the relevant personnel, including: Clerk assistants, legal officers, researchers and economists among others. In addition, the speedy delivery of the Committee’s outputs was partly attributed to the fact that there was cooperation from other

Above: The Public Accounts Committee-Local Government meeting with accounting officers at the Lira Municipal Council Hall in northern Uganda. Government departments who ensured that their personnel were readily available to work with the Committee and make quick clarifications on matters pertaining to the issues at hand. In addition to the staffing, the Committee enjoyed enormous cooperation from the Parliamentary Commission in terms of moral, material and financial support among others. The Speaker of Parliament, Rt Hon. Rebecca A. Kadaga and the Deputy Speaker, Rt Hon. Jacob L’Okori Oulanyah, granted the Committee leave to conduct its activities, which on many occasions required the Members to be excused from other parliamentary activities. It is important to note, however, that backlog is a Left: The Public Accounts Committee-Local Government receives considerable interest at a meeting at the Lira Municipal Council Hall in northern Uganda.