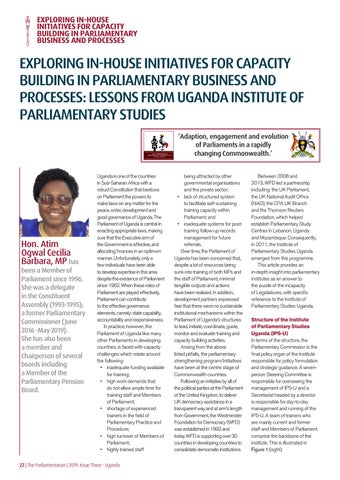 EXPLORING IN-HOUSE INITIATIVES FOR CAPACITY BUILDING IN PARLIAMENTARY BUSINESS AND PROCESSES: LESSONS FROM UGANDA INSTITUTE OF PARLIAMENTARY STUDIES ‘Adaption, engagement and evolution of Parliaments in a rapidly changing Commonwealth.’

been a Member of Parliament since 1996. She was a delegate in the Constituent Assembly (1993-1995); a former Parliamentary Commissioner (June 2016 -May 2019). She has also been a member and Chairperson of several boards including a Member of the Parliamentary Pension Board.

Uganda is one of the countries in Sub-Saharan Africa with a robust Constitution that bestows on Parliament the powers to make laws on any matter for the peace, order, development and good governance of Uganda. The Parliament of Uganda is central in enacting appropriate laws, making sure that the Executive arm of the Government is effective, and allocating finances in an optimum manner. Unfortunately, only a few individuals have been able to develop expertise in this area despite the existence of Parliament since 1962. When these roles of Parliament are played effectively, Parliament can contribute to the effective governance elements, namely: state capability, accountability and responsiveness. In practice, however, the Parliament of Uganda like many other Parliaments in developing countries, is faced with capacity challenges which rotate around the following: • inadequate funding available for training; • high work demands that do not allow ample time for training staff and Members of Parliament; • shortage of experienced trainers in the field of Parliamentary Practice and Procedure; • high turnover of Members of Parliament; • highly trained staff

being attracted by other governmental organisations and the private sector; • lack of structured system to facilitate self-sustaining training capacity within Parliament; and • inadequate systems for posttraining follow-up records management for future referrals. Over time, the Parliament of Uganda has been concerned that, despite a lot of resources being sunk into training of both MPs and the staff of Parliament, minimal tangible outputs and actions have been realised. In addition, development partners expressed fear that there were no sustainable institutional mechanisms within the Parliament of Uganda’s structures to lead, initiate, coordinate, guide, monitor and evaluate training and capacity building activities. Arising from the above listed pitfalls, the parliamentary strengthening program/initiatives have been at the centre stage of Commonwealth countries. Following an initiative by all of the political parties at the Parliament of the United Kingdom, to deliver UK democracy assistance in a transparent way and at arm’s length from Government, the Westminster Foundation for Democracy (WFD) was established in 1992 and today WFD is supporting over 30 countries in developing countries to consolidate democratic institutions.