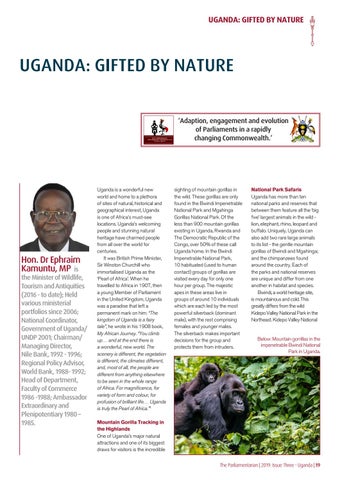 UGANDA: GIFTED BY NATURE ‘Adaption, engagement and evolution of Parliaments in a rapidly changing Commonwealth.’

Uganda is a wonderful new world and home to a plethora of sites of natural, historical and geographical interest, Uganda is one of Africa’s must-see locations. Uganda’s welcoming people and stunning natural heritage have charmed people from all over the world for centuries. It was British Prime Minister, Sir Winston Churchill who immortalised Uganda as the ‘Pearl of Africa’. When he travelled to Africa in 1907, then a young Member of Parliament in the United Kingdom, Uganda was a paradise that left a permanent mark on him: “The kingdom of Uganda is a fairy tale”, he wrote in his 1908 book, My African Journey. “You climb up… and at the end there is a wonderful, new world. The scenery is different, the vegetation is different, the climates different, and, most of all, the people are different from anything elsewhere to be seen in the whole range of Africa. For magnificence, for variety of form and colour, for profusion of brilliant life… Uganda is truly the Pearl of Africa.”1

sighting of mountain gorillas in the wild. These gorillas are only found in the Bwindi Impenetrable National Park and Mgahinga Gorillas National Park. Of the less than 900 mountain gorillas existing in Uganda, Rwanda and The Democratic Republic of the Congo, over 50% of these call Uganda home. In the Bwindi Impenetrable National Park, 10 habituated (used to human contact) groups of gorillas are visited every day for only one hour per group. The majestic apes in these areas live in groups of around 10 individuals which are each led by the most powerful silverback (dominant male), with the rest comprising females and younger males. The silverback makes important decisions for the group and protects them from intruders.

National Park Safaris Uganda has more than ten national parks and reserves that between them feature all the ‘big five’ largest animals in the wild lion, elephant, rhino, leopard and buffalo. Uniquely, Uganda can also add two rare large animals to its list - the gentle mountain gorillas of Bwindi and Mgahinga; and the chimpanzees found around the country. Each of the parks and national reserves are unique and differ from one another in habitat and species. Bwindi, a world heritage site, is mountainous and cold. This greatly differs from the wild Kidepo Valley National Park in the Northeast. Kidepo Valley National Below: Mountain gorrillas in the impenetrable Bwindi National Park in Uganda.

Mountain Gorilla Tracking in the Highlands One of Uganda’s major natural attractions and one of its biggest draws for visitors is the incredible The Parliamentarian | 2019: Issue Three - Uganda | 19