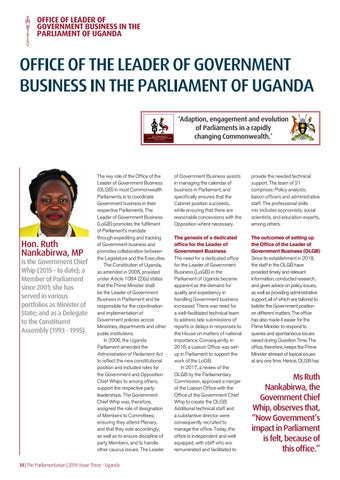 OFFICE OF LEADER OF GOVERNMENT BUSINESS IN THE PARLIAMENT OF UGANDA

OFFICE OF THE LEADER OF GOVERNMENT BUSINESS IN THE PARLIAMENT OF UGANDA ‘Adaption, engagement and evolution of Parliaments in a rapidly changing Commonwealth.’

of Government Business assists in managing the calendar of business in Parliament, and specifically ensures that the Cabinet position succeeds, while ensuring that there are reasonable concessions with the Opposition where necessary.

The genesis of a dedicated office for the Leader of Government Business The need for a dedicated office for the Leader of Government Business (LoGB) in the Parliament of Uganda became apparent as the demand for quality and expediency in handling Government business increased. There was need for a well-facilitated technical team to address late submissions of reports or delays in responses to the House on matters of national importance. Consequently, in 2016, a Liaison Office was setup in Parliament to support the work of the LoGB. In 2017, a review of the OLGB by the Parliamentary Commission, approved a merger of the Liaison Office with the Office of the Government Chief Whip to create the OLGB. Additional technical staff and a substantive director were consequently recruited to manage the office. Today, the office is independent and well equipped, with staff who are remunerated and facilitated to

The outcomes of setting up the Office of the Leader of Government Business (OLGB) Since its establishment in 2018, the staff in the OLGB have provided timely and relevant information, conducted research, and given advice on policy issues, as well as providing administrative support, all of which are tailored to bolster the Government position on different matters. The office has also made it easier for the Prime Minister to respond to queries and spontaneous issues raised during Question Time. The office, therefore, keeps the Prime Minister abreast of topical issues at any one time. Hence, OLGB has

Ms Ruth Nankabirwa, the Government Chief Whip, observes that, “Now Government’s impact in Parliament is felt, because of this office.”