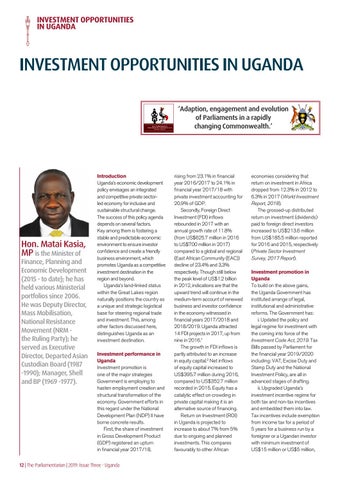 INVESTMENT OPPORTUNITIES IN UGANDA ‘Adaption, engagement and evolution of Parliaments in a rapidly changing Commonwealth.’

Hon. Matai Kasia, MP is the Minister of

Finance, Planning and Economic Development (2015 - to date); he has held various Ministerial portfolios since 2006. He was Deputy Director, Mass Mobilisation, National Resistance Movement (NRM the Ruling Party); he served as Executive Director, Departed Asian Custodian Board (1987 -1990); Manager, Shell and BP (1969 -1977).

Introduction Uganda’s economic development policy envisages an integrated and competitive private sectorled economy for inclusive and sustainable structural change. The success of this policy agenda depends on several factors. Key among them is fostering a stable and predictable economic environment to ensure investor confidence and create a friendly business environment, which promotes Uganda as a competitive investment destination in the region and beyond. Uganda’s land-linked status within the Great Lakes region naturally positions the country as a unique and strategic logistical base for steering regional trade and investment. This, among other factors discussed here, distinguishes Uganda as an investment destination. Investment performance in Uganda Investment promotion is one of the major strategies Government is employing to hasten employment creation and structural transformation of the economy. Government efforts in this regard under the National Development Plan (NDP) II have borne concrete results. First, the share of investment in Gross Development Product (GDP) registered an upturn in financial year 2017/18,

rising from 23.1% in financial year 2016/2017 to 24.1% in financial year 2017/18 with private investment accounting for 20.9% of GDP. Secondly, Foreign Direct Investment (FDI) inflows rebounded in 2017 with an annual growth rate of 11.8% (from US$625.7 million in 2016 to US$700 million in 2017) compared to a global and regional (East African Community (EAC)) decline of 23.4% and 3.3% respectively. Though still below the peak level of US$1.2 billion in 2012, indications are that the upward trend will continue in the medium-term account of renewed business and investor confidence in the economy witnessed in financial years 2017/2018 and 2018/2019. Uganda attracted 14 FDI projects in 2017, up from nine in 2016.1 The growth in FDI inflows is partly attributed to an increase in equity capital.2 Net inflows of equity capital increased to US$395.7 million during 2016, compared to US$352.7 million recorded in 2015. Equity has a catalytic effect on crowding in private capital making it is an alternative source of financing. Return on Investment (ROI) in Uganda is projected to increase to about 7% from 5% due to ongoing and planned investments. This compares favourably to other African

economies considering that return on investment in Africa dropped from 12.3% in 2012 to 6.3% in 2017 (World Investment Report, 2018). The grossed-up distributed return on investment (dividends) paid to foreign direct investors increased to US$213.6 million from US$185.5 million reported for 2016 and 2015, respectively (Private Sector Investment Survey, 2017 Report). Investment promotion in Uganda To build on the above gains, the Uganda Government has instituted arrange of legal, institutional and administrative reforms. The Government has: i. Updated the policy and legal regime for investment with the coming into force of the Investment Code Act, 2019. Tax Bills passed by Parliament for the financial year 2019/2020 including: VAT, Excise Duty and Stamp Duty and the National Investment Policy, are all in advanced stages of drafting. ii. Upgraded Uganda’s investment incentive regime for both tax and non-tax incentives and embedded them into law. Tax incentives include exemption from income tax for a period of 5 years for a business run by a foreigner or a Ugandan investor with minimum investment of US$15 million or US$5 million,