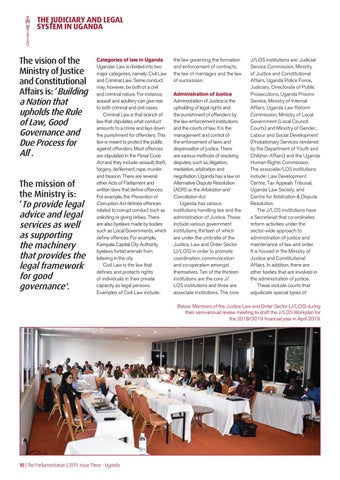 THE JUDICIARY AND LEGAL SYSTEM IN UGANDA

The vision of the Ministry of Justice and Constitutional Affairs is: ‘Building a Nation that upholds the Rule of Law, Good Governance and Due Process for All’. The mission of the Ministry is: ‘To provide legal advice and legal services as well as supporting the machinery that provides the legal framework for good governance&#39;.

Categories of law in Uganda Ugandan Law is divided into two major categories, namely: Civil Law and Criminal Law. Some conduct may, however, be both of a civil and criminal nature. For instance, assault and adultery can give rise to both criminal and civil cases. Criminal Law is that branch of law that stipulates what conduct amounts to a crime and lays down the punishment for offenders. This law is meant to protect the public against offenders. Most offences are stipulated in the Penal Code Act and they include: assault, theft, forgery, defilement, rape, murder and treason. There are several other Acts of Parliament and written laws that define offences. For example, the Prevention of Corruption Act defines offences related to corrupt conduct such as soliciting or giving bribes. There are also byelaws made by bodies such as Local Governments, which define offences. For example, Kampala Capital City Authority byelaws forbid animals from loitering in the city. Civil Law is the law that defines and protects rights of individuals in their private capacity as legal persons. Examples of Civil Law include:

J/LOS institutions are: Judicial Service Commission, Ministry of Justice and Constitutional Affairs, Uganda Police Force, Judiciary, Directorate of Public Prosecutions, Uganda Prisons Service, Ministry of Internal Affairs, Uganda Law Reform Commission, Ministry of Local Government (Local Council Courts) and Ministry of Gender, Labour and Social Development (Probationary Services rendered by the Department of Youth and Children Affairs) and the Uganda Human Rights Commission. The associate/LOS institutions include: Law Development Centre, Tax Appeals Tribunal, Uganda Law Society, and Centre for Arbitration &amp; Dispute Resolution. The J/LOS institutions have a Secretariat that co-ordinates reform activities under the sector-wide approach to administration of justice and maintenance of law and order. It is housed in the Ministry of Justice and Constitutional Affairs. In addition, there are other bodies that are involved in the administration of justice. These include courts that adjudicate special types of

Below: Members of the Justice Law and Order Sector (J/LOS) during their semi-annual review meeting to draft the J/LOS Workplan for the 2018/2019 financial year in April 2019.