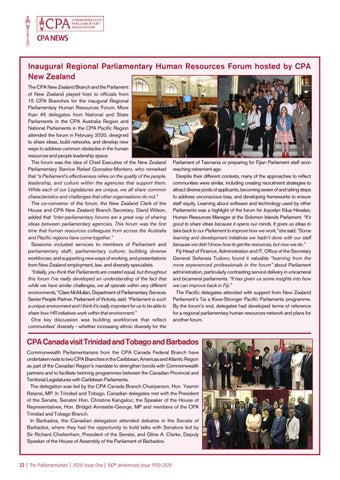 CPA NEWS Inaugural Regional Parliamentary Human Resources Forum hosted by CPA New Zealand The CPA New Zealand Branch and the Parliament of New Zealand played host to officials from 15 CPA Branches for the inaugural Regional Parliamentary Human Resources Forum. More than 45 delegates from National and State Parliaments in the CPA Australia Region and National Parliaments in the CPA Pacific Region attended the forum in February 2020, designed to share ideas, build networks, and develop new ways to address common obstacles in the human resources and people leadership space. The forum was the idea of Chief Executive of the New Zealand Parliamentary Service Rafael Gonzalez-Montero, who remarked that “a Parliament’s effectiveness relies on the quality of the people, leadership, and culture within the agencies that support them. While each of our Legislatures are unique, we all share common characteristics and challenges that other organisations do not.” The co-convenor of the forum, the New Zealand Clerk of the House and CPA New Zealand Branch Secretary, David Wilson, added that “inter-parliamentary forums are a great way of sharing ideas between parliamentary agencies. This forum was the first time that human resources colleagues from across the Australia and Pacific regions have come together.” Sessions included services to members of Parliament and parliamentary staff; parliamentary culture; building diverse workforces; and supporting new ways of working, and presentations from New Zealand employment, law, and diversity specialists. “Initially, you think that Parliaments are created equal, but throughout this forum I’ve really developed an understanding of the fact that while we have similar challenges, we all operate within very different environments,” Clare McMullan, Department of Parliamentary Services Senior People Partner, Parliament of Victoria, said. “Parliament is such a unique environment and I think it’s really important for us to be able to share how HR initiatives work within that environment.” One key discussion was building workforces that reflect communities’ diversity - whether increasing ethnic diversity for the

Parliament of Tasmania or preparing for Fijian Parliament staff soon reaching retirement age. Despite their different contexts, many of the approaches to reflect communities were similar, including creating recruitment strategies to attract diverse pools of applicants, becoming aware of and taking steps to address unconscious bias, and developing frameworks to ensure staff equity. Learning about software and technology used by other Parliaments was a highlight of the forum for Joycelyn Kilua Hevalao, Human Resources Manager at the Solomon Islands Parliament. “It’s good to share ideas because it opens our minds. It gives us ideas to take back to our Parliament to improve how we work,” she said. “Some learning and development initiatives we hadn’t done with our staff because we didn’t know how to get the resources, but now we do.” Fiji Head of Finance, Administration and IT, Office of the Secretary General Sefanaia Tudonu found it valuable “learning from the more experienced professionals in the forum” about Parliament administration, particularly contrasting service delivery in unicameral and bicameral parliaments. “It has given us some insights into how we can improve back in Fiji.” The Pacific delegates attended with support from New Zealand Parliament’s Tai a Kiwa-Stronger Pacific Parliaments programme. By the forum’s end, delegates had developed terms of reference for a regional parliamentary human resources network and plans for another forum.

CPA Canada visit Trinidad and Tobago and Barbados Commonwealth Parliamentarians from the CPA Canada Federal Branch have undertaken visits to two CPA Branches in the Caribbean, Americas and Atlantic Region as part of the Canadian Region’s mandate to strengthen bonds with Commonwealth partners and to facilitate twinning programmes between the Canadian Provincial and Territorial Legislatures with Caribbean Parliaments. The delegation was led by the CPA Canada Branch Chairperson, Hon. Yasmin Ratansi, MP. In Trinidad and Tobago, Canadian delegates met with the President of the Senate, Senator Hon. Christine Kangaloo; the Speaker of the House of Representatives, Hon. Bridgid Annisette-George, MP and members of the CPA Trinidad and Tobago Branch. In Barbados, the Canadian delegation attended debates in the Senate of Barbados, where they had the opportunity to hold talks with Senators led by Sir Richard Cheltenham, President of the Senate, and Gline A. Clarke, Deputy Speaker of the House of Assembly of the Parliament of Barbados.