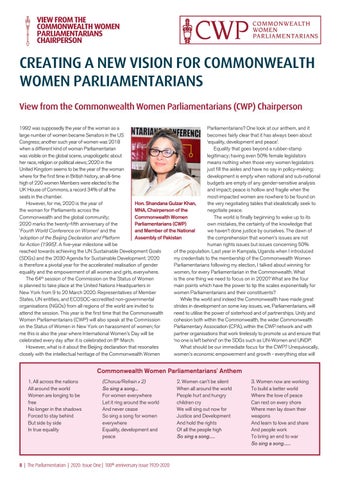 CREATING A NEW VISION FOR COMMONWEALTH WOMEN PARLIAMENTARIANS View from the Commonwealth Women Parliamentarians (CWP) Chairperson 1992 was supposedly the year of the woman as a Parliamentarians? One look at our anthem, and it large number of women became Senators in the US becomes fairly clear that it has always been about Congress; another such year of women was 2018 ‘equality, development and peace’. when a different kind of woman Parliamentarian Equality that goes beyond a rubber-stamp was visible on the global scene, unapologetic about legitimacy; having even 50% female legislators her race, religion or political views; 2020 in the means nothing when those very women legislators United Kingdom seems to be the year of the woman just fill the aisles and have no say in policy-making; where for the first time in British history, an all-time development is empty when national and sub-national high of 220 women Members were elected to the budgets are empty of any gender-sensitive analysis UK House of Commons, a record 34% of all the and impact; peace is hollow and fragile when the seats in the chamber. most-impacted women are nowhere to be found on However, for me, 2020 is the year of the very negotiating tables that idealistically seek to Hon. Shandana Gulzar Khan, the woman for Parliaments across the negotiate peace. MNA, Chairperson of the Commonwealth and the global community; The world is finally beginning to wake up to its Commonwealth Women 2020 marks the twenty-fifth anniversary of the own mistakes, the certainty of the knowledge that Parliamentarians (CWP) ’Fourth World Conference on Women’ and the we haven’t done justice by ourselves. The dawn of and Member of the National ’adoption of the Beijing Declaration and Platform the comprehension that women’s issues are not Assembly of Pakistan for Action (1995)’. A five-year milestone will be human rights issues but issues concerning 50% reached towards achieving the UN Sustainable Development Goals of the population. Last year in Kampala, Uganda when I introduced (SDGs) and the 2030 Agenda for Sustainable Development. 2020 my credentials to the membership of the Commonwealth Women is therefore a pivotal year for the accelerated realisation of gender Parliamentarians following my election, I talked about winning for equality and the empowerment of all women and girls, everywhere. women, for every Parliamentarian in the Commonwealth. What The 64th session of the Commission on the Status of Women is the one thing we need to focus on in 2020? What are the four is planned to take place at the United Nations Headquarters in main points which have the power to tip the scales exponentially for New York from 9 to 20 March 2020. Representatives of Member women Parliamentarians and their constituents? States, UN entities, and ECOSOC-accredited non-governmental While the world and indeed the Commonwealth have made great organisations (NGOs) from all regions of the world are invited to strides in development on some key issues, we, Parliamentarians, will attend the session. This year is the first time that the Commonwealth need to utilise the power of sisterhood and of partnerships. Unity and Women Parliamentarians (CWP) will also speak at the Commission cohesion both within the Commonwealth, the wider Commonwealth on the Status of Women in New York on harassment of women; for Parliamentary Association (CPA), within the CWP network and with me this is also the year where International Women’s Day will be partner organisations that work tirelessly to promote us and ensure that celebrated every day after it is celebrated on 8th March. ‘no one is left behind’ on the SDGs such as UN-Women and UNDP. However, what is it about the Beijing declaration that resonates What should be our immediate focus for the CWP? Unequivocally, closely with the intellectual heritage of the Commonwealth Women women’s economic empowerment and growth - everything else will

Commonwealth Women Parliamentarians&#39; Anthem 1. All across the nations All around the world Women are longing to be free No longer in the shadows Forced to stay behind But side by side In true equality

2. Women can&#39;t be silent When all around the world People hurt and hungry children cry We will sing out now for Justice and Development And hold the rights Of all the people high So sing a song.....

3. Women now are working To build a better world Where the love of peace Can rest on every shore Where men lay down their weapons And learn to love and share And people work To bring an end to war So sing a song...... 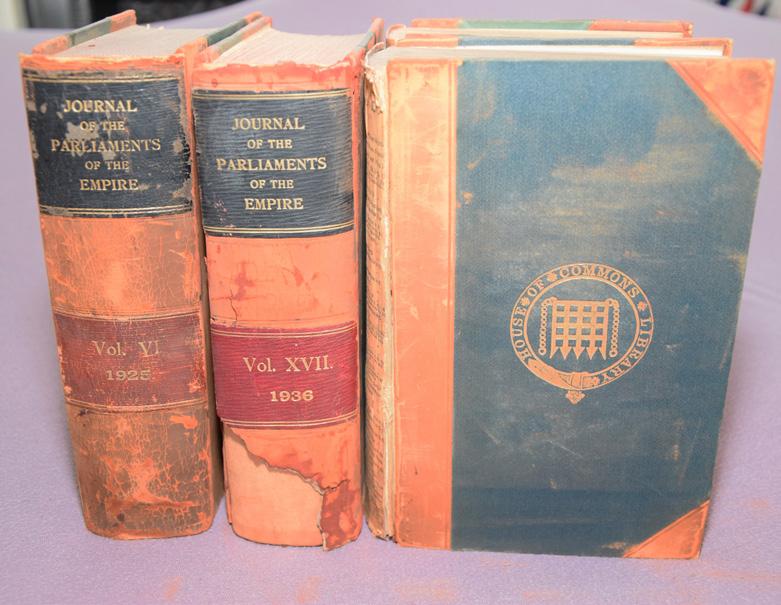 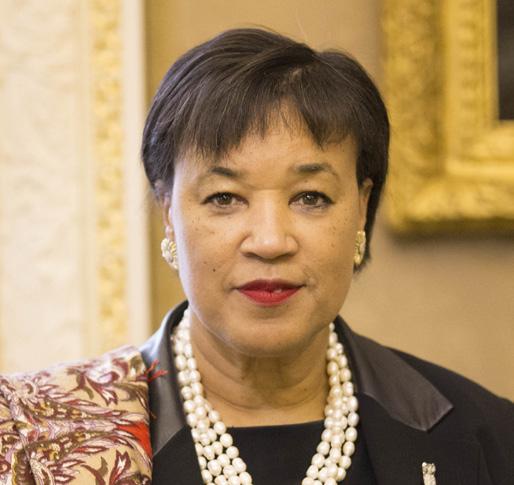 The Commonwealth Secretary-General looks ahead to the CHOGM 2020 in Rwanda. 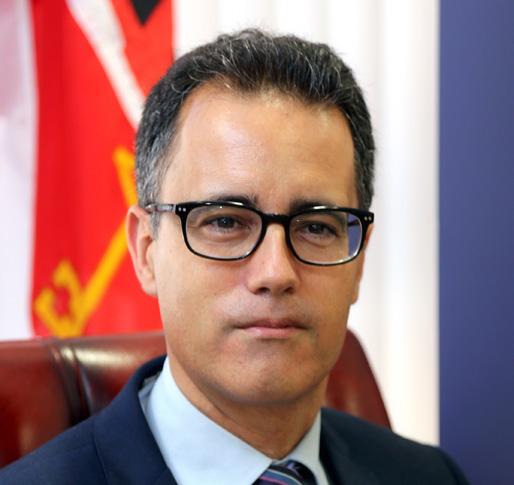 The Deputy Chief Minister of Gibraltar looks at future links being built in the Commonwealth. 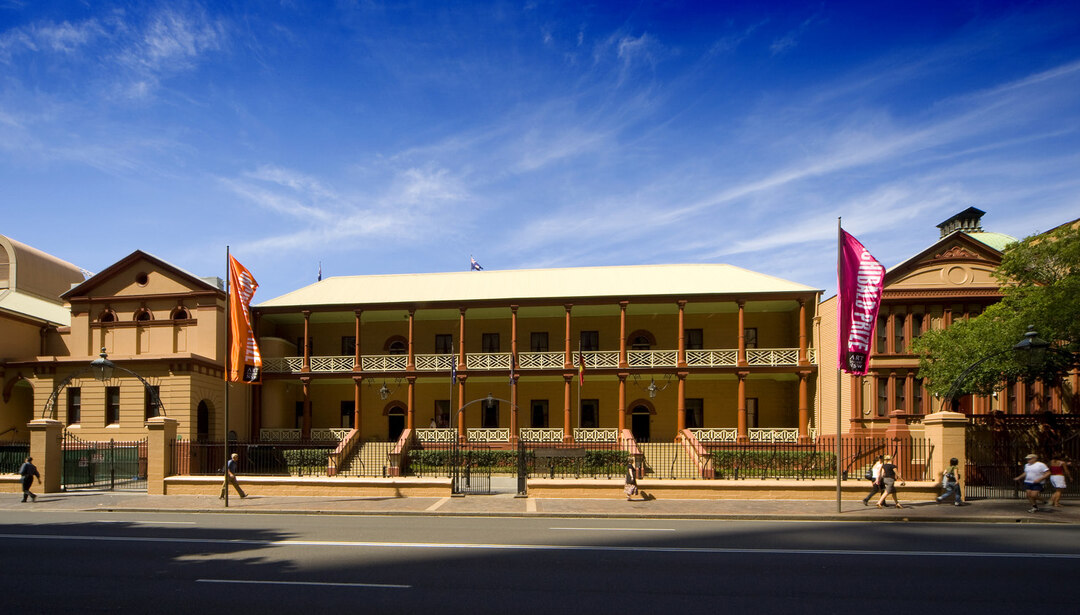 Engaging the public through parliamentary petitions 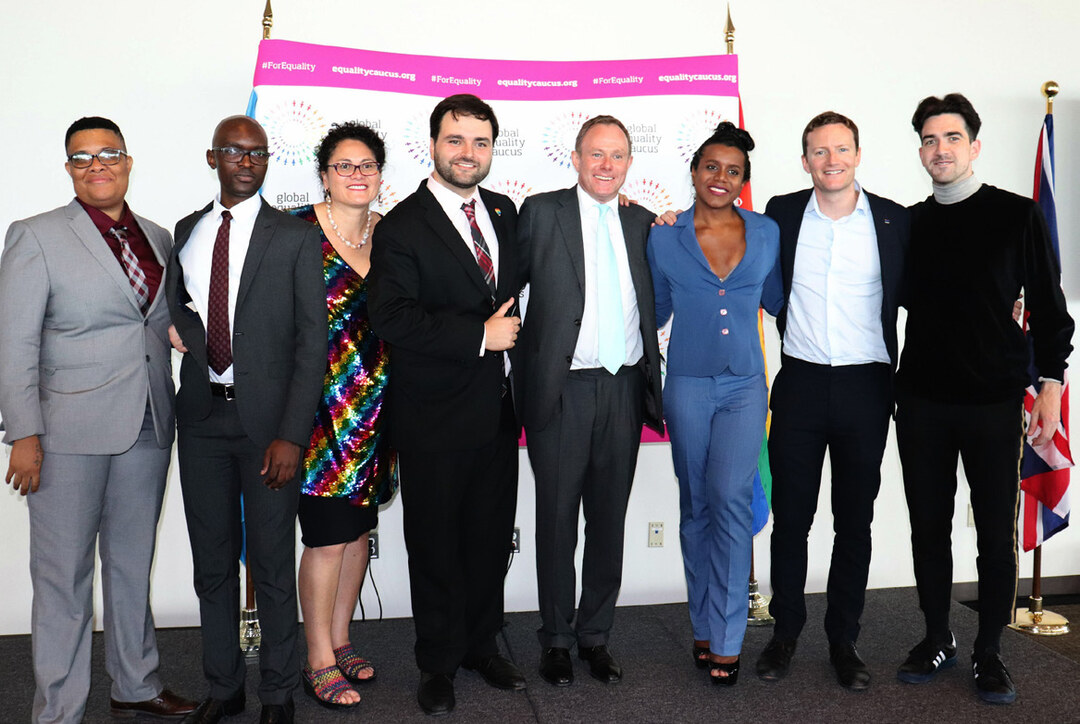 Promoting Global Equality in the Commonwealth

A group of Parliamentarians are seeking to promote global equality for LGBT+ citizens.