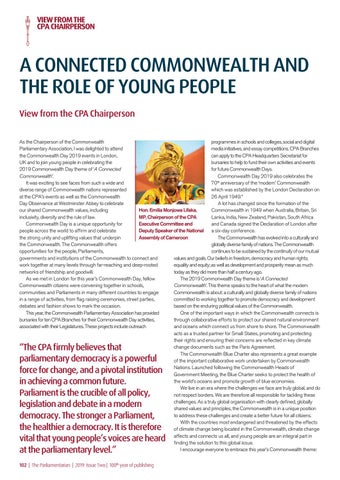 A CONNECTED COMMONWEALTH AND THE ROLE OF YOUNG PEOPLE View from the CPA Chairperson As the Chairperson of the Commonwealth programmes in schools and colleges, social and digital Parliamentary Association, I was delighted to attend media initiatives, and essay competitions. CPA Branches the Commonwealth Day 2019 events in London, can apply to the CPA Headquarters Secretariat for UK and to join young people in celebrating the bursaries to help to fund their own activities and events 2019 Commonwealth Day theme of ‘A Connected for future Commonwealth Days. Commonwealth’. Commonwealth Day 2019 also celebrates the It was exciting to see faces from such a wide and 70th anniversary of the ‘modern’ Commonwealth diverse range of Commonwealth nations represented which was established by the London Declaration on at the CPA’s events as well as the Commonwealth 26 April 1949.* Day Observance at Westminster Abbey to celebrate A lot has changed since the formation of the our shared Commonwealth values, including Hon. Emilia Monjowa Lifaka, Commonwealth in 1949 when Australia, Britain, Sri inclusivity, diversity and the rule of law. MP, Chairperson of the CPA Lanka, India, New Zealand, Pakistan, South Africa Commonwealth Day is a unique opportunity for Executive Committee and and Canada signed the Declaration of London after people across the world to affirm and celebrate Deputy Speaker of the National a six-day conference. the strong unity and uplifting values that underpin Assembly of Cameroon The Commonwealth has evolved into a culturally and the Commonwealth. The Commonwealth offers globally diverse family of nations. The Commonwealth opportunities for the people, Parliaments, continues to be sustained by the continuity of our mutual governments and institutions of the Commonwealth to connect and values and goals. Our beliefs in freedom, democracy and human rights; work together at many levels through far-reaching and deep-rooted equality and equity; as well as development and prosperity mean as much networks of friendship and goodwill. today as they did more than half a century ago. As we met in London for this year’s Commonwealth Day, fellow The 2019 Commonwealth Day theme is ‘A Connected Commonwealth citizens were convening together in schools, Commonwealth’. This theme speaks to the heart of what the modern communities and Parliaments in many different countries to engage Commonwealth is about: a culturally and globally diverse family of nations in a range of activities, from flag raising ceremonies, street parties, committed to working together to promote democracy and development debates and fashion shows to mark the occasion. based on the enduring political values of the Commonwealth. This year, the Commonwealth Parliamentary Association has provided One of the important ways in which the Commonwealth connects is bursaries for ten CPA Branches for their Commonwealth Day activities, through collaborative efforts to protect our shared natural environment associated with their Legislatures. These projects include outreach and oceans which connect us from shore to shore. The Commonwealth acts as a trusted partner for Small States, promoting and protecting their rights and ensuring their concerns are reflected in key climate change documents such as the Paris Agreement. The Commonwealth Blue Charter also represents a great example of the important collaborative work undertaken by Commonwealth Nations. Launched following the Commonwealth Heads of Government Meeting, the Blue Charter seeks to protect the health of the world’s oceans and promote growth of blue economies. We live in an era where the challenges we face are truly global, and do not respect borders. We are therefore all responsible for tackling these challenges. As a truly global organisation with clearly defined, globally shared values and principles, the Commonwealth is in a unique position to address these challenges and create a better future for all citizens. With the countries most endangered and threatened by the effects of climate change being located in the Commonwealth, climate change affects and connects us all, and young people are an integral part in finding the solution to this global issue. I encourage everyone to embrace this year’s Commonwealth theme:

“The CPA firmly believes that parliamentary democracy is a powerful force for change, and a pivotal institution in achieving a common future. Parliament is the crucible of all policy, legislation and debate in a modern democracy. The stronger a Parliament, the healthier a democracy. It is therefore vital that young people’s voices are heard at the parliamentary level.” 102 | The Parliamentarian | 2019: Issue Two | 100th year of publishing