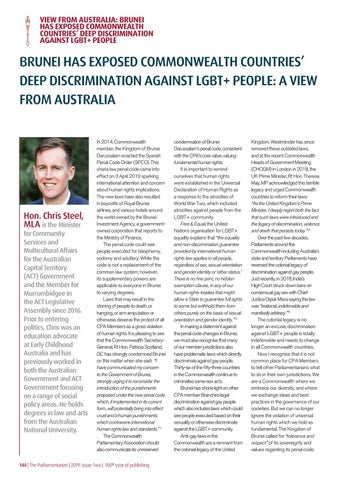 for Community Services and Multicultural Affairs for the Australian Capital Territory (ACT) Government and the Member for Murrumbidgee in the ACT Legislative Assembly since 2016. Prior to entering politics, Chris was an education advocate at Early Childhood Australia and has previously worked in both the Australian Government and ACT Government focusing on a range of social policy areas. He holds degrees in law and arts from the Australian National University.

In 2014, Commonwealth member, the Kingdom of Brunei Darussalam enacted the Syariah Penal Code Order (SPCO). This sharia law penal code came into effect on 3 April 2019 sparking international attention and concern about human rights implications. The new laws have also resulted in boycotts of Royal Brunei airlines, and various hotels around the world owned by the Brunei Investment Agency, a governmentowned corporation that reports to the Ministry of Finance. The penal code could see people executed for blasphemy, sodomy and adultery. While the code is not a replacement of the common law system; however, its supplementary powers are applicable to everyone in Brunei to varying degrees. Laws that may result in the stoning of people to death, or hanging, or arm amputation or otherwise, deserve the protest of all CPA Members as a gross violation of human rights. It is pleasing to see that the Commonwealth SecretaryGeneral, Rt Hon. Patricia Scotland, QC has strongly condemned Brunei on this matter when she said: “I have communicated my concern to the Government of Brunei, strongly urging it to reconsider the introduction of the punishments proposed under the new penal code which, if implemented in its current form, will potentially bring into effect cruel and inhuman punishments which contravene international human rights law and standards.” 1 The Commonwealth Parliamentary Association should also communicate its unreserved

condemnation of Brunei Darussalam’s penal code, consistent with the CPA’s core value; valuing fundamental human rights. It is important to remind ourselves that human rights were established in the Universal Declaration of Human Rights as a response to the atrocities of World War Two, which included atrocities against people from the LGBT+ community. Free &amp; Equal, the United Nations organisation for LGBT+ equality explains that “the equality and non-discrimination guarantee provided by international human rights law applies to all people, regardless of sex, sexual orientation and gender identity or ‘other status.’ There is no fine print, no hidden exemption clause, in any of our human rights treaties that might allow a State to guarantee full rights to some but withhold them from others purely on the basis of sexual orientation and gender identity.” 2 In making a statement against the penal code changes in Brunei, we must also recognise that many of our member jurisdictions also have problematic laws which directly discriminate against gay people. Thirty-six of the fifty-three countries in the Commonwealth continue to criminalise same-sex acts. Brunei has shone light on other CPA member Branches legal discrimination against gay people which also includes laws which could see people executed based on their sexuality or otherwise discriminate against the LGBT+ community. Anti-gay laws in the Commonwealth are a remnant from the colonial legacy of the United

Kingdom. Westminster has since removed these outdated laws, and at the recent Commonwealth Heads of Government Meeting (CHOGM) in London in 2018, the UK Prime Minister, Rt Hon. Theresa May, MP acknowledged this terrible legacy and urged Commonwealth countries to reform their laws: “As the United Kingdom’s Prime Minister, I deeply regret both the fact that such laws were introduced and the legacy of discrimination, violence and death that persists today.” 3 Over the past few decades, Parliaments around the Commonwealth including Australia’s state and territory Parliaments have reversed the colonial legacy of discrimination against gay people. Just recently, in 2018, India’s High Court struck down bans on consensual gay sex with Chief Justice Dipak Misra saying the law was “irrational, indefensible and manifestly arbitrary.” 4 The colonial legacy is no longer an excuse, discrimination against LGBT+ people is totally indefensible and needs to change in all Commonwealth countries. Now I recognise that it is not common place for CPA Members to tell other Parliamentarians what to do in their own jurisdictions. We are a Commonwealth where we embrace our diversity, and where we exchange ideas and best practices in the governance of our societies. But we can no longer ignore the violation of universal human rights which we hold as fundamental. The Kingdom of Brunei called for “tolerance and respect” of its sovereignty and values regarding its penal code.