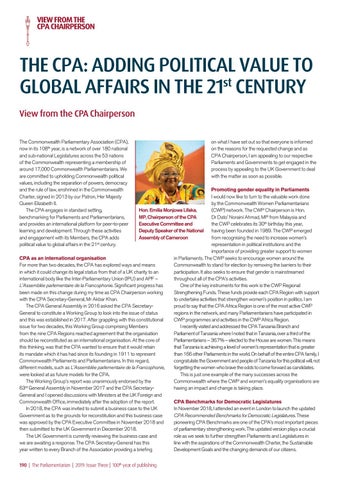 THE CPA: ADDING POLITICAL VALUE TO GLOBAL AFFAIRS IN THE 21st CENTURY View from the CPA Chairperson The Commonwealth Parliamentary Association (CPA), now in its 108th year, is a network of over 180 national and sub-national Legislatures across the 53 nations of the Commonwealth representing a membership of around 17,000 Commonwealth Parliamentarians. We are committed to upholding Commonwealth political values, including the separation of powers, democracy and the rule of law, enshrined in the Commonwealth Charter, signed in 2013 by our Patron, Her Majesty Queen Elizabeth II. The CPA engages in standard setting, benchmarking for Parliaments and Parliamentarians, and provides an international platform for peer-to-peer learning and development. Through these activities and engagement with its Members, the CPA adds political value to global affairs in the 21st century.

on what I have set out so that everyone is informed on the reasons for the requested change and as CPA Chairperson, I am appealing to our respective Parliaments and Governments to get engaged in the process by appealing to the UK Government to deal with the matter as soon as possible.

Promoting gender equality in Parliaments I would now like to turn to the valuable work done by the Commonwealth Women Parliamentarians Hon. Emilia Monjowa Lifaka, (CWP) network. The CWP Chairperson is Hon. MP, Chairperson of the CPA Dr Dato&#39; Noraini Ahmad, MP from Malaysia and Executive Committee and the CWP celebrates its 30th birthday this year, Deputy Speaker of the National having been founded in 1989. The CWP emerged Assembly of Cameroon from recognising the need to increase women’s representation in political institutions and the importance of providing greater support to women CPA as an international organisation in Parliaments. The CWP seeks to encourage women around the For more than two decades, the CPA has explored ways and means Commonwealth to stand for election by removing the barriers to their in which it could change its legal status from that of a UK charity to an participation. It also seeks to ensure that gender is mainstreamed international body like the Inter-Parliamentary Union (IPU) and APF – throughout all of the CPA’s activities. L’Assemblée parlementaire de la Francophonie. Significant progress has One of the key instruments for this work is the CWP Regional been made on this change during my time as CPA Chairperson working Strengthening Funds. These funds provide each CPA Region with support with the CPA Secretary-General, Mr Akbar Khan. to undertake activities that strengthen women’s position in politics. I am The CPA General Assembly in 2016 asked the CPA Secretaryproud to say that the CPA Africa Region is one of the most active CWP General to constitute a Working Group to look into the issue of status regions in the network, and many Parliamentarians have participated in and this was established in 2017. After grappling with this constitutional CWP programmes and activities in the CWP Africa Region. issue for two decades, this Working Group comprising Members I recently visited and addressed the CPA Tanzania Branch and from the nine CPA Regions reached agreement that the organisation Parliament of Tanzania where I noted that in Tanzania, over a third of the should be reconstituted as an international organisation. At the core of Parliamentarians – 36.7% – elected to the House are women. This means this thinking, was that the CPA wanted to ensure that it would retain that Tanzania is achieving a level of women’s representation that is greater its mandate which it has had since its founding in 1911 to represent than 166 other Parliaments in the world. On behalf of the entire CPA family, I Commonwealth Parliaments and Parliamentarians. In this regard, congratulate the Government and people of Tanzania for this political will, not different models, such as L&#39;Assemblée parlementaire de la Francophonie, forgetting the women who brave the odds to come forward as candidates. were looked at as future models for the CPA. This is just one example of the many successes across the The Working Group’s report was unanimously endorsed by the Commonwealth where the CWP and women’s equality organisations are 63rd General Assembly in November 2017 and the CPA Secretaryhaving an impact and change is taking place. General and I opened discussions with Ministers at the UK Foreign and Commonwealth Office, immediately after the adoption of the report. CPA Benchmarks for Democratic Legislatures In 2018, the CPA was invited to submit a business case to the UK In November 2018, I attended an event in London to launch the updated Government as to the grounds for reconstitution and this business case CPA Recommended Benchmarks for Democratic Legislatures. These was approved by the CPA Executive Committee in November 2018 and pioneering CPA Benchmarks are one of the CPA’s most important pieces then submitted to the UK Government in December 2018. of parliamentary strengthening work. The updated version plays a crucial The UK Government is currently reviewing the business case and role as we seek to further strengthen Parliaments and Legislatures in we are awaiting a response. The CPA Secretary-General has this line with the aspirations of the Commonwealth Charter, the Sustainable year written to every Branch of the Association providing a briefing Development Goals and the changing demands of our citizens. 190 | The Parliamentarian | 2019: Issue Three | 100th year of publishing