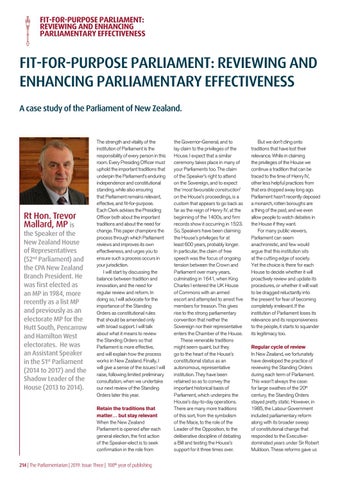 FIT-FOR-PURPOSE PARLIAMENT: REVIEWING AND ENHANCING PARLIAMENTARY EFFECTIVENESS A case study of the Parliament of New Zealand.

the Speaker of the New Zealand House of Representatives (52nd Parliament) and the CPA New Zealand Branch President. He was first elected as an MP in 1984, more recently as a list MP and previously as an electorate MP for the Hutt South, Pencarrow and Hamilton West electorates. He was an Assistant Speaker in the 51st Parliament (2014 to 2017) and the Shadow Leader of the House (2013 to 2014).

The strength and vitality of the institution of Parliament is the responsibility of every person in this room. Every Presiding Officer must uphold the important traditions that underpin the Parliament’s enduring independence and constitutional standing, while also ensuring that Parliament remains relevant, effective, and fit-for-purpose. Each Clerk advises the Presiding Officer both about the important traditions and about the need for change. This paper champions the process through which Parliament reviews and improves its own effectiveness, and urges you to ensure such a process occurs in your jurisdiction. I will start by discussing the balance between tradition and innovation, and the need for regular review and reform. In doing so, I will advocate for the importance of the Standing Orders as constitutional rules that should be amended only with broad support. I will talk about what it means to review the Standing Orders so that Parliament is more effective, and will explain how the process works in New Zealand. Finally, I will give a sense of the issues I will raise, following limited preliminary consultation, when we undertake our next review of the Standing Orders later this year. Retain the traditions that matter… but stay relevant When the New Zealand Parliament is opened after each general election, the first action of the Speaker-elect is to seek confirmation in the role from

the Governor-General, and to lay claim to the privileges of the House. I expect that a similar ceremony takes place in many of your Parliaments too. The claim of the Speaker’s right to attend on the Sovereign, and to expect the ‘most favourable construction’ on the House’s proceedings, is a custom that appears to go back as far as the reign of Henry IV, at the beginning of the 1400s, and firm records show it occurring in 1523. So, Speakers have been claiming the House’s privileges for at least 600 years, probably longer. In particular, the claim of free speech was the focus of ongoing tension between the Crown and Parliament over many years, culminating in 1641, when King Charles I entered the UK House of Commons with an armed escort and attempted to arrest five members for treason. This gives rise to the strong parliamentary convention that neither the Sovereign nor their representative enters the Chamber of the House. These venerable traditions might seem quaint, but they go to the heart of the House’s constitutional status as an autonomous, representative institution. They have been retained so as to convey the important historical basis of Parliament, which underpins the House’s day-to-day operations. There are many more traditions of this sort, from the symbolism of the Mace, to the role of the Leader of the Opposition, to the deliberative discipline of debating a Bill and testing the House’s support for it three times over.

But we don’t cling onto traditions that have lost their relevance. While in claiming the privileges of the House we continue a tradition that can be traced to the time of Henry IV, other less helpful practices from that era dropped away long ago. Parliament hasn’t recently deposed a monarch, rotten boroughs are a thing of the past, and we even allow people to watch debates in the House if they want. For many public viewers, Parliament can seem anachronistic, and few would argue that this institution sits at the cutting edge of society. Yet the choice is there for each House to decide whether it will proactively review and update its procedures, or whether it will wait to be dragged reluctantly into the present for fear of becoming completely irrelevant. If the institution of Parliament loses its relevance and its responsiveness to the people, it starts to squander its legitimacy too. Regular cycle of review In New Zealand, we fortunately have developed the practice of reviewing the Standing Orders during each term of Parliament. This wasn’t always the case: for large swathes of the 20th century, the Standing Orders stayed pretty static. However, in 1985, the Labour Government included parliamentary reform along with its broader sweep of constitutional change that responded to the Executivedominated years under Sir Robert Muldoon. These reforms gave us