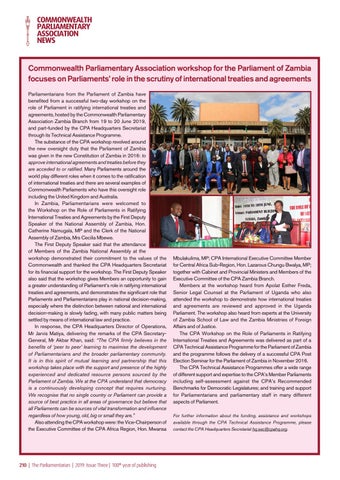 COMMONWEALTH PARLIAMENTARY ASSOCIATION NEWS Commonwealth Parliamentary Association workshop for the Parliament of Zambia focuses on Parliaments’ role in the scrutiny of international treaties and agreements Parliamentarians from the Parliament of Zambia have benefited from a successful two-day workshop on the role of Parliament in ratifying international treaties and agreements, hosted by the Commonwealth Parliamentary Association Zambia Branch from 19 to 20 June 2019, and part-funded by the CPA Headquarters Secretariat through its Technical Assistance Programme. The substance of the CPA workshop revolved around the new oversight duty that the Parliament of Zambia was given in the new Constitution of Zambia in 2016: to approve international agreements and treaties before they are acceded to or ratified. Many Parliaments around the world play different roles when it comes to the ratification of international treaties and there are several examples of Commonwealth Parliaments who have this oversight role including the United Kingdom and Australia. In Zambia, Parliamentarians were welcomed to the Workshop on the Role of Parliaments in Ratifying International Treaties and Agreements by the First Deputy Speaker of the National Assembly of Zambia, Hon. Catherine Namugala, MP and the Clerk of the National Assembly of Zambia, Mrs Cecilia Mbewe. The First Deputy Speaker said that the attendance of Members of the Zambia National Assembly at the workshop demonstrated their commitment to the values of the Commonwealth and thanked the CPA Headquarters Secretariat for its financial support for the workshop. The First Deputy Speaker also said that the workshop gives Members an opportunity to gain a greater understanding of Parliament’s role in ratifying international treaties and agreements, and demonstrates the significant role that Parliaments and Parliamentarians play in national decision-making, especially where the distinction between national and international decision-making is slowly fading, with many public matters being settled by means of international law and practice. In response, the CPA Headquarters Director of Operations, Mr Jarvis Matiya, delivering the remarks of the CPA SecretaryGeneral, Mr Akbar Khan, said: “The CPA firmly believes in the benefits of ‘peer to peer’ learning to maximise the development of Parliamentarians and the broader parliamentary community. It is in this spirit of mutual learning and partnership that this workshop takes place with the support and presence of the highly experienced and dedicated resource persons sourced by the Parliament of Zambia. We at the CPA understand that democracy is a continuously developing concept that requires nurturing. We recognise that no single country or Parliament can provide a source of best practice in all areas of governance but believe that all Parliaments can be sources of vital transformation and influence regardless of how young, old, big or small they are.” Also attending the CPA workshop were: the Vice-Chairperson of the Executive Committee of the CPA Africa Region, Hon. Mwansa

Mbulakulima, MP; CPA International Executive Committee Member for Central Africa Sub-Region, Hon. Lazarous Chungu Bwalya, MP; together with Cabinet and Provincial Ministers and Members of the Executive Committee of the CPA Zambia Branch. Members at the workshop heard from Apolat Esther Freda, Senior Legal Counsel at the Parliament of Uganda who also attended the workshop to demonstrate how international treaties and agreements are reviewed and approved in the Uganda Parliament. The workshop also heard from experts at the University of Zambia School of Law and the Zambia Ministries of Foreign Affairs and of Justice. The CPA Workshop on the Role of Parliaments in Ratifying International Treaties and Agreements was delivered as part of a CPA Technical Assistance Programme for the Parliament of Zambia and the programme follows the delivery of a successful CPA Post Election Seminar for the Parliament of Zambia in November 2016. The CPA Technical Assistance Programmes offer a wide range of different support and expertise to the CPA’s Member Parliaments including self-assessment against the CPA’s Recommended Benchmarks for Democratic Legislatures; and training and support for Parliamentarians and parliamentary staff in many different aspects of Parliament. For further information about the funding, assistance and workshops available through the CPA Technical Assistance Programme, please contact the CPA Headquarters Secretariat hq.sec@cpahq.org.