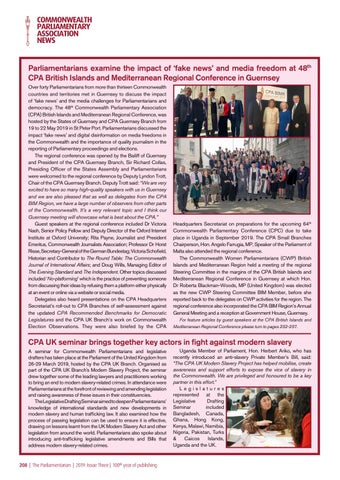 COMMONWEALTH PARLIAMENTARY ASSOCIATION NEWS Parliamentarians examine the impact of ‘fake news’ and media freedom at 48th CPA British Islands and Mediterranean Regional Conference in Guernsey Over forty Parliamentarians from more than thirteen Commonwealth countries and territories met in Guernsey to discuss the impact of ‘fake news’ and the media challenges for Parliamentarians and democracy. The 48th Commonwealth Parliamentary Association (CPA) British Islands and Mediterranean Regional Conference, was hosted by the States of Guernsey and CPA Guernsey Branch from 19 to 22 May 2019 in St Peter Port. Parliamentarians discussed the impact ‘fake news’ and digital disinformation on media freedoms in the Commonwealth and the importance of quality journalism in the reporting of Parliamentary proceedings and elections. The regional conference was opened by the Bailiff of Guernsey and President of the CPA Guernsey Branch, Sir Richard Collas, Presiding Officer of the States Assembly and Parliamentarians were welcomed to the regional conference by Deputy Lyndon Trott, Chair of the CPA Guernsey Branch. Deputy Trott said: “We are very excited to have so many high-quality speakers with us in Guernsey and we are also pleased that as well as delegates from the CPA BIM Region, we have a large number of observers from other parts of the Commonwealth. It’s a very relevant topic and I think our Guernsey meeting will showcase what is best about the CPA.” Guest speakers at the regional conference included Dr Victoria Nash, Senior Policy Fellow and Deputy Director of the Oxford Internet Institute at Oxford University; Rita Payne, Journalist and President Emeritus, Commonwealth Journalists Association; Professor Dr Horst Risse, Secretary-General of the German Bundestag; Victoria Schofield, Historian and Contributor to The Round Table: The Commonwealth Journal of International Affairs; and Doug Wills, Managing Editor of The Evening Standard and The Independent. Other topics discussed included ‘No-platforming’ which is the practice of preventing someone from discussing their ideas by refusing them a platform either physically at an event or online via a website or social media. Delegates also heard presentations on the CPA Headquarters Secretariat’s roll-out to CPA Branches of self-assessment against the updated CPA Recommended Benchmarks for Democratic Legislatures and the CPA UK Branch’s work on Commonwealth Election Observations. They were also briefed by the CPA

Headquarters Secretariat on preparations for the upcoming 64th Commonwealth Parliamentary Conference (CPC) due to take place in Uganda in September 2019. The CPA Small Branches Chairperson, Hon. Angelo Farrugia, MP, Speaker of the Parliament of Malta also attended the regional conference. The Commonwealth Women Parliamentarians (CWP) British Islands and Mediterranean Region held a meeting of the regional Steering Committee in the margins of the CPA British Islands and Mediterranean Regional Conference in Guernsey at which Hon. Dr Roberta Blackman-Woods, MP (United Kingdom) was elected as the new CWP Steering Committee BIM Member, before she reported back to the delegates on CWP activities for the region. The regional conference also incorporated the CPA BIM Region’s Annual General Meeting and a reception at Government House, Guernsey. For feature articles by guest speakers at the CPA British Islands and Mediterranean Regional Conference please turn to pages 232-237.

CPA UK seminar brings together key actors in fight against modern slavery A seminar for Commonwealth Parliamentarians and legislative drafters has taken place at the Parliament of the United Kingdom from 26-29 March 2019, hosted by the CPA UK Branch. Organised as part of the CPA UK Branch’s Modern Slavery Project, the seminar drew together some of the leading lawyers and practitioners working to bring an end to modern slavery-related crimes. In attendance were Parliamentarians at the forefront of reviewing and amending legislation and raising awareness of these issues in their constituencies. The Legislative Drafting Seminar aimed to deepen Parliamentarians’ knowledge of international standards and new developments in modern slavery and human trafficking law. It also examined how the process of passing legislation can be used to ensure it is effective, drawing on lessons learnt from the UK Modern Slavery Act and other legislation from around the world. Parliamentarians also spoke about introducing anti-trafficking legislative amendments and Bills that address modern slavery-related crimes.

Uganda Member of Parliament, Hon. Herbert Ariko, who has recently introduced an anti-slavery Private Member’s Bill, said: “The CPA UK Modern Slavery Project has helped mobilise, create awareness and support efforts to expose the vice of slavery in the Commonwealth. We are privileged and honoured to be a key partner in this effort.” Legislatures represented at the Legislative Drafting Seminar included Bangladesh, Canada, Ghana, Hong Kong, Kenya, Malawi, Namibia, Nigeria, Pakistan, Turks &amp; Caicos Islands, Uganda and the UK.