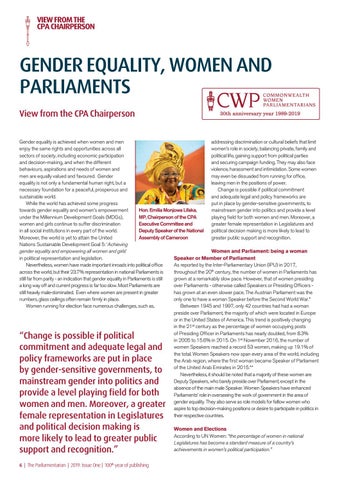 GENDER EQUALITY, WOMEN AND PARLIAMENTS View from the CPA Chairperson Gender equality is achieved when women and men addressing discrimination or cultural beliefs that limit enjoy the same rights and opportunities across all women’s role in society, balancing private, family and sectors of society, including economic participation political life, gaining support from political parties and decision-making, and when the different and securing campaign funding. They may also face behaviours, aspirations and needs of women and violence, harassment and intimidation. Some women men are equally valued and favoured. Gender may even be dissuaded from running for office, equality is not only a fundamental human right, but a leaving men in the positions of power. necessary foundation for a peaceful, prosperous and Change is possible if political commitment sustainable world. and adequate legal and policy frameworks are While the world has achieved some progress put in place by gender-sensitive governments, to towards gender equality and women’s empowerment Hon. Emilia Monjowa Lifaka, mainstream gender into politics and provide a level under the Millennium Development Goals (MDGs), MP, Chairperson of the CPA playing field for both women and men. Moreover, a women and girls continue to suffer discrimination Executive Committee and greater female representation in Legislatures and in all social institutions in every part of the world. Deputy Speaker of the National political decision making is more likely to lead to Moreover, the world is yet to attain the United Assembly of Cameroon greater public support and recognition. Nations Sustainable Development Goal 5: ‘Achieving gender equality and empowering all women and girls’ Women and Parliament: being a woman in political representation and legislation. Speaker or Member of Parliament Nevertheless, women have made important inroads into political office As reported by the Inter-Parliamentary Union (IPU) in 2017, across the world, but their 23.7% representation in national Parliaments is throughout the 20th century, the number of women in Parliaments has still far from parity - an indication that gender equality in Parliaments is still grown at a remarkably slow pace. However, that of women presiding a long way off and current progress is far too slow. Most Parliaments are over Parliaments - otherwise called Speakers or Presiding Officers still heavily male-dominated. Even where women are present in greater has grown at an even slower pace. The Austrian Parliament was the numbers, glass ceilings often remain firmly in place. only one to have a woman Speaker before the Second World War.* Women running for election face numerous challenges, such as, Between 1945 and 1997, only 42 countries had had a woman preside over Parliament, the majority of which were located in Europe or in the United States of America. This trend is positively changing in the 21st century as the percentage of women occupying posts of Presiding Officer in Parliaments has nearly doubled, from 8.3% in 2005 to 15.6% in 2015. On 1st November 2016, the number of women Speakers reached a record 53 women, making up 19.1% of the total. Women Speakers now span every area of the world, including the Arab region, where the first woman became Speaker of Parliament of the United Arab Emirates in 2015.** Nevertheless, it should be noted that a majority of these women are Deputy Speakers, who barely preside over Parliament, except in the absence of the main male Speaker. Women Speakers have enhanced Parliaments’ role in overseeing the work of government in the area of gender equality. They also serve as role models for fellow women who aspire to top decision-making positions or desire to participate in politics in their respective countries.

“Change is possible if political commitment and adequate legal and policy frameworks are put in place by gender-sensitive governments, to mainstream gender into politics and provide a level playing field for both women and men. Moreover, a greater female representation in Legislatures and political decision making is more likely to lead to greater public support and recognition.” 6 | The Parliamentarian | 2019: Issue One | 100th year of publishing

Women and Elections According to UN Women: “the percentage of women in national Legislatures has become a standard measure of a country’s achievements in women’s political participation.”