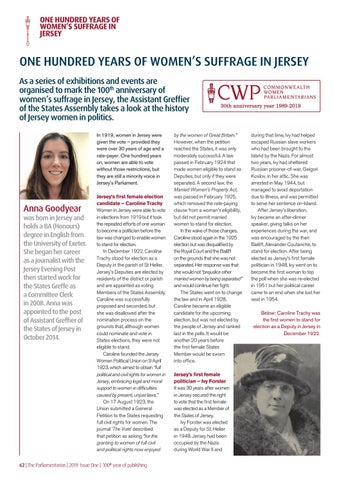 ONE HUNDRED YEARS OF WOMEN’S SUFFRAGE IN JERSEY

ONE HUNDRED YEARS OF WOMEN’S SUFFRAGE IN JERSEY As a series of exhibitions and events are organised to mark the 100th anniversary of women’s suffrage in Jersey, the Assistant Greffier of the States Assembly takes a look at the history of Jersey women in politics. In 1919, women in Jersey were given the vote – provided they were over 30 years of age and a rate-payer. One hundred years on, women are able to vote without those restrictions, but they are still a minority voice in Jersey’s Parliament.

was born in Jersey and holds a BA (Honours) degree in English from the University of Exeter. She began her career as a journalist with the Jersey Evening Post then started work for the States Greffe as a Committee Clerk in 2008. Anna was appointed to the post of Assistant Greffier of the States of Jersey in October 2014.

Jersey’s first female election candidate – Caroline Trachy Women in Jersey were able to vote in elections from 1919 but it took the repeated efforts of one woman to become a politician before the law was changed to enable women to stand for election. In December 1922, Caroline Trachy stood for election as a Deputy in the parish of St Helier. Jersey’s Deputies are elected by residents of the district or parish and are appointed as voting Members of the States Assembly. Caroline was successfully proposed and seconded, but she was disallowed after the nomination process on the grounds that, although women could nominate and vote in States elections, they were not eligible to stand. Caroline founded the Jersey Women Political Union on 9 April 1923, which aimed to obtain “full political and civil rights for women in Jersey, embracing legal and moral support to women in difficulties caused by present, unjust laws.” On 17 August 1923, the Union submitted a General Petition to the States requesting full civil rights for women. The journal ‘The Vote’ described that petition as asking “for the granting to women of full civil and political rights now enjoyed

by the women of Great Britain.” However, when the petition reached the States, it was only moderately successful. A law passed in February 1924 that made women eligible to stand as Deputies, but only if they were separated. A second law, the Married Women’s Property Act, was passed in February 1925, which removed the rate-paying clause from a woman’s eligibility, but did not permit married women to stand for election. In the wake of those changes, Caroline stood again in the 1925 election but was disqualified by the Royal Court and the Bailiff on the grounds that she was not separated. Her response was that she would not “prejudice other married women by being separated” and would continue her fight. The States went on to change the law and in April 1928, Caroline became an eligible candidate for the upcoming election, but was not elected by the people of Jersey and ranked last in the polls. It would be another 20 years before the first female States Member would be sworn into office. Jersey’s first female politician – Ivy Forster It was 30 years after women in Jersey secured the right to vote that the first female was elected as a Member of the States of Jersey. Ivy Forster was elected as a Deputy for St. Helier in 1948. Jersey had been occupied by the Nazis during World War II and

during that time, Ivy had helped escaped Russian slave workers who had been brought to the Island by the Nazis. For almost two years, Ivy had sheltered Russian prisoner-of-war, Geigori Koslov, in her attic. She was arrested in May 1944, but managed to avoid deportation due to illness, and was permitted to serve her sentence on-Island. After Jersey’s liberation, Ivy became an after-dinner speaker, giving talks on her experiences during the war, and was encouraged by the then Bailiff, Alexander Coutanche, to stand for election. After being elected as Jersey’s first female politician in 1948, Ivy went on to become the first woman to top the poll when she was re-elected in 1951 but her political career came to an end when she lost her seat in 1954. Below: Caroline Trachy was the first women to stand for election as a Deputy in Jersey in December 1922.