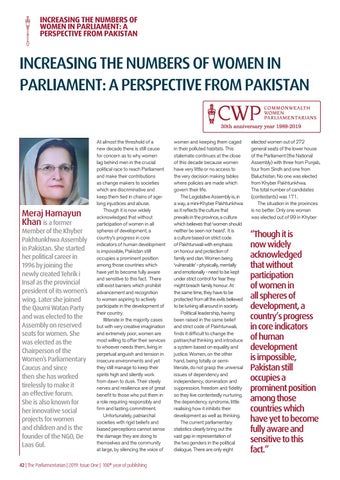 INCREASING THE NUMBERS OF WOMEN IN PARLIAMENT: A PERSPECTIVE FROM PAKISTAN

INCREASING THE NUMBERS OF WOMEN IN PARLIAMENT: A PERSPECTIVE FROM PAKISTAN

Meraj Hamayun Khan is a former

Member of the Khyber Pakhtunkhwa Assembly in Pakistan. She started her political career in 1996 by joining the newly created Tehrik i Insaf as the provincial president of its women’s wing. Later she joined the Qaumi Watan Party and was elected to the Assembly on reserved seats for women. She was elected as the Chairperson of the Women’s Parliamentary Caucus and since then she has worked tirelessly to make it an effective forum. She is also known for her innovative social projects for women and children and is the founder of the NGO, De Laas Gul.

At almost the threshold of a new decade there is still cause for concern as to why women lag behind men in the crucial political race to reach Parliament and make their contributions as change makers to societies which are discriminative and keep them tied in chains of agelong injustices and abuse. Though it is now widely acknowledged that without participation of women in all spheres of development, a country’s progress in core indicators of human development is impossible, Pakistan still occupies a prominent position among those countries which have yet to become fully aware and sensitive to this fact. There still exist barriers which prohibit advancement and recognition to women aspiring to actively participate in the development of their country. Illiterate in the majority cases but with very creative imagination and extremely poor, women are most willing to offer their services to whoever needs them, living in perpetual anguish and tension in insecure environments and yet they still manage to keep their spirits high and silently work from dawn to dusk. Their steely nerves and resilience are of great benefit to those who put them in a role requiring responsibly and firm and lasting commitment. Unfortunately, patriarchal societies with rigid beliefs and biased perceptions cannot sense the damage they are doing to themselves and the community at large, by silencing the voice of

women and keeping them caged in their polluted habitats. This stalemate continues at the close of this decade because women have very little or no access to the very decision making tables where policies are made which govern their life. The Legislative Assembly is, in a way, a mini-Khyber Pakhtunkhwa as it reflects the culture that prevails in the province, a culture which believes that ‘women should neither be seen nor heard’. It is a culture based on strict code of Pakhtunwali with emphasis on honour and protection of family and clan. Women being ‘vulnerable’ - physically, mentally and emotionally - need to be kept under strict control for fear they might breach family honour. At the same time, they have to be protected from all the evils believed to be lurking all around in society. Political leadership, having been raised in the same belief and strict code of Pakhtunwali, finds it difficult to change the patriarchal thinking and introduce a system based on equality and justice. Women, on the other hand, being totally or semiliterate, do not grasp the universal issues of dependency and independency, domination and suppression, freedom and fidelity so they live contentedly nurturing the dependency syndrome, little realising how it inhibits their development as well as thinking. The current parliamentary statistics clearly bring out the vast gap in representation of the two genders in the political dialogue. There are only eight

elected women out of 272 general seats of the lower house of the Parliament (the National Assembly) with three from Punjab, four from Sindh and one from Baluchistan. No one was elected from Khyber Pakhtunkhwa. The total number of candidates (contestants) was 171. The situation in the provinces is no better. Only one woman was elected out of 99 in Khyber

“Though it is now widely acknowledged that without participation of women in all spheres of development, a country’s progress in core indicators of human development is impossible, Pakistan still occupies a prominent position among those countries which have yet to become fully aware and sensitive to this fact.”