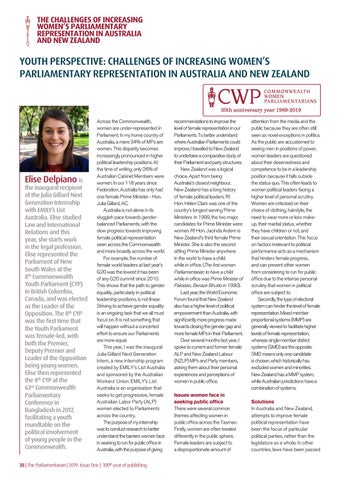 the inaugural recipient of the Julia Gillard Next Generation Internship with EMILY’s List Australia. Elise studied Law and International Relations and this year, she starts work in the legal profession. Elise represented the Parliament of New South Wales at the 8th Commonwealth Youth Parliament (CYP) in British Columbia, Canada, and was elected as the Leader of the Opposition. The 8th CYP was the first time that the Youth Parliament was female-led, with both the Premier, Deputy Premier and Leader of the Opposition being young women. Elise then represented the 8th CYP at the 63rd Commonwealth Parliamentary Conference in Bangladesh in 2017, facilitating a youth roundtable on the political involvement of young people in the Commonwealth.

Across the Commonwealth, women are under-represented in Parliament. In my home country of Australia, a mere 34% of MPs are women. This disparity becomes increasingly pronounced in higher political leadership positions. At the time of writing, only 26% of Australian Cabinet Members were women. In our 118 years since Federation, Australia has only had one female Prime Minister - Hon. Julia Gillard, AC. Australia is not alone in its sluggish pace towards genderbalanced Parliaments, with the slow progress towards improving female political representation seen across the Commonwealth and more broadly across the world. For example, the number of female world leaders at last year’s G20 was the lowest it has been of any G20 summit since 2010. This shows that the path to gender equality, particularly in political leadership positions, is not linear. Striving to achieve gender equality is an ongoing task that we all must focus on. It is not something that will happen without a concerted effort to ensure our Parliaments are more equal. This year, I was the inaugural Julia Gillard Next Generation Intern, a new internship program created by EMILY’s List Australia and sponsored by the Australian Workers’ Union. EMILY’s List Australia is an organisation that seeks to get progressive, female Australian Labor Party (ALP) women elected to Parliaments across the country. The purpose of my internship was to conduct research to better understand the barriers women face in seeking to run for public office in Australia, with the purpose of giving

recommendations to improve the level of female representation in our Parliaments. To better understand where Australian Parliaments could improve, I travelled to New Zealand to undertake a comparative study of their Parliament and party structures. New Zealand was a logical choice. Apart from being Australia’s closest neighbour, New Zealand has a long history of female political leaders. Rt Hon. Helen Clark was one of the country’s longest serving Prime Ministers. In 1999, the two major candidates for Prime Minister were women. Rt Hon. Jacinda Ardern is New Zealand’s third female Prime Minister. She is also the second sitting Prime Minister anywhere in the world to have a child while in office. (The first woman Parliamentarian to have a child while in office was Prime Minister of Pakistan, Benazir Bhutto in 1990). Last year, the World Economic Forum found that New Zealand also has a higher level of political empowerment than Australia, with significantly more progress made towards closing the gender gap and more female MPs in their Parliament. Over several months last year, I spoke to current and former female ALP and New Zealand Labour (NZLP) MPs and Party members, asking them about their personal experiences and perceptions of women in public office. Issues women face in seeking public office There were several common themes affecting women in public office across the Tasman. Firstly, women are often treated differently in the public sphere. Female leaders are subject to a disproportionate amount of

attention from the media and the public because they are often still seen as novel exceptions in politics. As the public are accustomed to seeing men in positions of power, women leaders are questioned about their deservedness and competence to be in a leadership position because it falls outside the status quo. This often leads to women political leaders facing a higher level of personal scrutiny. Women are criticised on their choice of clothing, hairstyle, the need to wear more or less makeup, their marital status, whether they have children or not, and their sexual orientation. This focus on factors irrelevant to political performance acts as a mechanism that hinders female progress, and can prevent other women from considering to run for public office due to the intense personal scrutiny that women in political office are subject to. Secondly, the type of electoral system can hinder the level of female representation. Mixed member proportional systems (MMP) are generally viewed to facilitate higher levels of female representation, whereas single member district systems (SMD) are the opposite. SMD means only one candidate is chosen, which historically has excluded women and minorities. New Zealand has a MMP system, while Australian jurisdictions have a combination of systems. Solutions In Australia and New Zealand, attempts to improve female political representation have been the focus of particular political parties, rather than the legislature as a whole. In other countries, laws have been passed