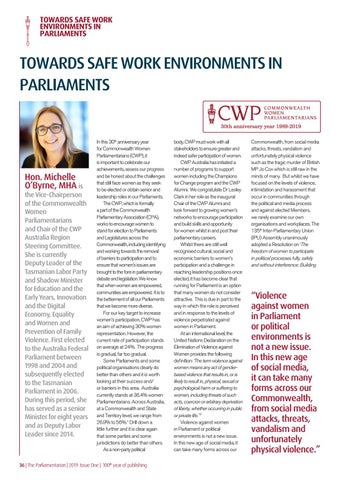 TOWARDS SAFE WORK ENVIRONMENTS IN PARLIAMENTS

TOWARDS SAFE WORK ENVIRONMENTS IN PARLIAMENTS

the Vice-Chairperson of the Commonwealth Women Parliamentarians and Chair of the CWP Australia Region Steering Committee. She is currently Deputy Leader of the Tasmanian Labor Party and Shadow Minister for Education and the Early Years, Innovation and the Digital Economy, Equality and Women and Prevention of Family Violence. First elected to the Australia Federal Parliament between 1998 and 2004 and subsequently elected to the Tasmanian Parliament in 2006. During this period, she has served as a senior Minister for eight years and as Deputy Labor Leader since 2014.

In this 30th anniversary year for Commonwealth Women Parliamentarians (CWP), it is important to celebrate our achievements, assess our progress and be honest about the challenges that still face women as they seek to be elected or obtain senior and leadership roles in our Parliaments. The CWP, which is formally a part of the Commonwealth Parliamentary Association (CPA), works to encourage women to stand for election to Parliaments and Legislatures across the Commonwealth, including identifying and working towards the removal of barriers to participation and to ensure that women’s issues are brought to the fore in parliamentary debate and legislation. We know that when women are empowered, communities are empowered. It is to the betterment of all our Parliaments that we become more diverse. For our key target to increase women’s participation, CWP has an aim of achieving 30% women representation. However, the current rate of participation stands on average at 24%. The progress is gradual, far too gradual. Some Parliaments and some political organisations clearly do better than others and it is worth looking at their success and/ or barriers in this area. Australia currently stands at 36.4% women Parliamentarians. Across Australia, at a Commonwealth and State and Territory level, we range from 26.9% to 56%.1 Drill down a little further and it is clear again that some parties and some jurisdictions do better than others. As a non-party political

body, CWP must work with all stakeholders to ensure greater and indeed safer participation of women. CWP Australia has initiated a number of programs to support women including the Champions for Change program and the CWP Alumni. We congratulate Dr Lesley Clark in her role as the inaugural Chair of the CWP Alumni and look forward to growing women’s networks to encourage participation and build skills and opportunity for women whilst in and post their parliamentary careers. Whilst there are still well recognised cultural, social and economic barriers to women’s participation and a challenge in reaching leadership positions once elected, it has become clear that running for Parliament is an option that many women do not consider attractive. This is due in part to the way in which the role is perceived and in response to the levels of violence perpetrated against women in Parliament. At an international level, the United Nations Declaration on the Elimination of Violence against Women provides the following definition: ‘The term violence against women means any act of genderbased violence that results in, or is likely to result in, physical, sexual or psychological harm or suffering to women, including threats of such acts, coercion or arbitrary deprivation of liberty, whether occurring in public or private life.’ 2 Violence against women in Parliament or political environments is not a new issue. In this new age of social media, it can take many forms across our

Commonwealth, from social media attacks, threats, vandalism and unfortunately physical violence such as the tragic murder of British MP Jo Cox which is still raw in the minds of many. But whilst we have focused on the levels of violence, intimidation and harassment that occur in communities through the political and media process and against elected Members, we rarely examine our own organisations and workplaces. The 135th Inter-Parliamentary Union (IPU) Assembly unanimously adopted a Resolution on ‘The freedom of women to participate in political processes fully, safely and without interference: Building

“Violence against women in Parliament or political environments is not a new issue. In this new age of social media, it can take many forms across our Commonwealth, from social media attacks, threats, vandalism and unfortunately physical violence.”