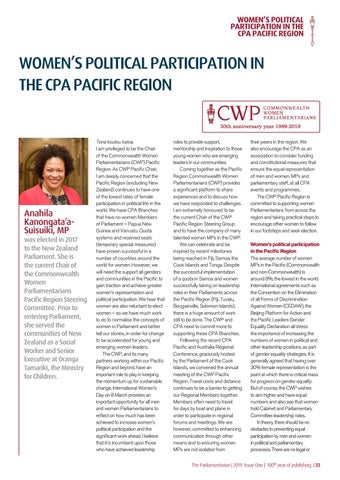 was elected in 2017 to the New Zealand Parliament. She is the current Chair of the Commonwealth Women Parliamentarians Pacific Region Steering Committee. Prior to entering Parliament, she served the communities of New Zealand as a Social Worker and Senior Executive at Oranga Tamariki, the Ministry for Children.

Tena koutou katoa. I am privileged to be the Chair of the Commonwealth Women Parliamentarians (CWP) Pacific Region. As CWP Pacific Chair, I am deeply concerned that the Pacific Region (excluding New Zealand) continues to have one of the lowest rates of female participation in political life in the world. We have CPA Branches that have no women Members of Parliament – Papua New Guinea and Vanuatu. Quota systems and reserved seats (temporary special measures) have proven successful in a number of countries around the world for women. However, we will need the support all genders and communities in the Pacific to gain traction and achieve greater women’s representation and political participation. We hear that women are also reluctant to elect women – so we have much work to do to normalise the concepts of women in Parliament and better tell our stories, in order for change to be accelerated for young and emerging women leaders. The CWP, and its many partners working within our Pacific Region and beyond, have an important role to play in keeping the momentum up for sustainable change. International Women’s Day on 8 March provides an important opportunity for all men and women Parliamentarians to reflect on how much has been achieved to increase women’s political participation and the significant work ahead. I believe that it is incumbent upon those who have achieved leadership

roles to provide support, mentorship and inspiration to those young women who are emerging leaders in our communities. Coming together as the Pacific Region Commonwealth Women Parliamentarians (CWP) provides a significant platform to share experiences and to discuss how we have responded to challenges. I am extremely honoured to be the current Chair of the CWP Pacific Region Steering Group and to have the company of many talented women MPs in the CWP. We can celebrate and be inspired by recent milestones being reached in Fiji, Samoa, the Cook Islands and Tonga. Despite the successful implementation of a quota in Samoa and women successfully taking on leadership roles in their Parliaments across the Pacific Region (Fiji, Tuvalu, Bougainville, Solomon Islands), there is a huge amount of work still to be done. The CWP and CPA need to commit more to supporting these CPA Branches. Following the recent CPA Pacific and Australia Regional Conference, graciously hosted by the Parliament of the Cook Islands, we convened the annual meeting of the CWP Pacific Region. Travel costs and distance continues to be a barrier to getting our Regional Members together. Members often need to travel for days by boat and plane in order to participate in regional forums and meetings. We are however, committed to enhancing communication through other means and to ensuring women MPs are not isolated from

their peers in the region. We also encourage the CPA as an association to consider funding and constitutional measures that ensure the equal representation of men and women, MPs and parliamentary staff, at all CPA events and programmes. The CWP Pacific Region is committed to supporting women Parliamentarians from across the region and taking practical steps to encourage other women to follow in our footsteps and seek election. Women’s political participation in the Pacific Region The average number of women MPs in the Pacific (Commonwealth and non-Commonwealth) is around 8%, the lowest in the world. International agreements such as the Convention on the Elimination of all Forms of Discrimination Against Women (CEDAW), the Beijing Platform for Action and the Pacific Leaders Gender Equality Declaration all stress the importance of increasing the numbers of women in political and other leadership positions, as part of gender equality strategies. It is generally agreed that having over 30% female representation is the point at which there is critical mass for progress on gender equality. But of course, the CWP wishes to aim higher and have equal numbers and also see that women hold Cabinet and Parliamentary Committee leadership roles. In theory, there should be no obstacles to preventing equal participation by men and women in political and parliamentary processes. There are no legal or