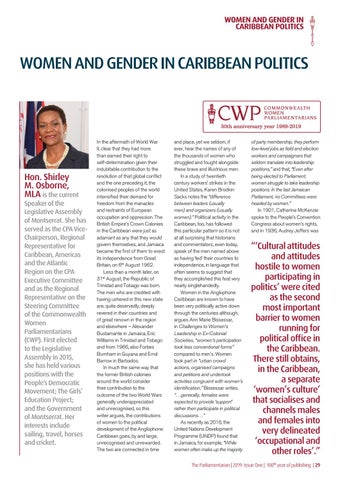 WOMEN AND GENDER IN CARIBBEAN POLITICS

WOMEN AND GENDER IN CARIBBEAN POLITICS

Speaker of the Legislative Assembly of Montserrat. She has served as the CPA ViceChairperson, Regional Representative for Caribbean, Americas and the Atlantic Region on the CPA Executive Committee and as the Regional Representative on the Steering Committee of the Commonwealth Women Parliamentarians (CWP). First elected to the Legislative Assembly in 2015, she has held various positions with the People’s Democratic Movement; The Girls’ Education Project; and the Government of Montserrat. Her interests include sailing, travel, horses and cricket.

In the aftermath of World War II, clear that they had more than earned their right to self-determination given their indubitable contribution to the resolution of that global conflict and the one preceding it, the colonised peoples of the world intensified their demand for freedom from the manacles and restraints of European occupation and oppression. The British Empire’s Crown Colonies in the Caribbean were just as adamant as any that they would govern themselves, and Jamaica became the first of them to wrest its independence from Great Britain, on 6th August 1962. Less than a month later, on 31st August, the Republic of Trinidad and Tobago was born. The men who are credited with having ushered in this new state are, quite deservedly, deeply revered in their countries and of great renown in the region and elsewhere – Alexander Bustamante in Jamaica, Eric Williams in Trinidad and Tobago and from 1966, also Forbes Burnham in Guyana and Errol Barrow in Barbados. In much the same way that the former British colonies around the world consider their contribution to the outcome of the two World Wars generally underappreciated and unrecognised, so this writer argues, the contributions of women to the political development of the Anglophone Caribbean goes, by and large, unrecognised and unrewarded. The two are connected in time

and place, yet we seldom, if ever, hear the names of any of the thousands of women who struggled and fought alongside these brave and illustrious men. In a study of twentieth century workers’ strikes in the United States, Karen Brodkin Sacks notes the “difference between leaders (usually men) and organizers (usually women).” Political activity in the Caribbean, too, has followed this particular pattern so it is not at all surprising that historians and commentators, even today, speak of the men named above as having ‘led’ their countries to independence, in language that often seems to suggest that they accomplished this feat very nearly singlehandedly. Women in the Anglophone Caribbean are known to have been very politically active down through the centuries although, argues Ann Marie Bissessar, in Challenges to Women’s Leadership in Ex-Colonial Societies, “women’s participation took less conventional forms” compared to men’s. Women took part in “urban crowd actions, organised campaigns and petitions and undertook activities congruent with women’s identification.” Bissessar writes, “…generally, females were expected to provide ‘support’ rather then participate in political discussions…” As recently as 2016, the United Nations Development Programme (UNDP) found that in Jamaica, for example, “While women often make up the majority

of party membership, they perform low-level jobs as field and election workers and campaigners that seldom translate into leadership positions,” and that, “Even after being elected to Parliament, women struggle to take leadership positions. In the last Jamaican Parliament, no Committees were headed by women.” In 1901, Catherine McKenzie spoke to the People’s Convention Congress about women’s rights, and in 1936, Audrey Jeffers was

“‘Cultural attitudes and attitudes hostile to women participating in politics’ were cited as the second most important barrier to women running for political office in the Caribbean. There still obtains, in the Caribbean, a separate ‘women’s culture’ that socialises and channels males and females into very delineated ‘occupational and other roles’.”