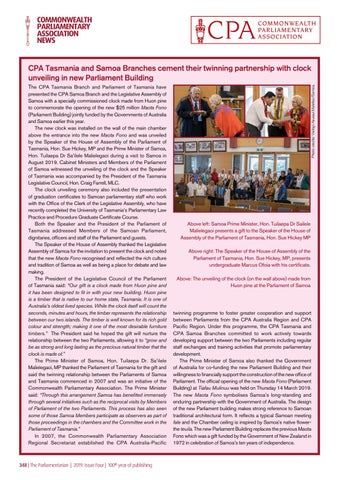 The CPA Tasmania Branch and Parliament of Tasmania have presented the CPA Samoa Branch and the Legislative Assembly of Samoa with a specially commissioned clock made from Huon pine to commemorate the opening of the new $25 million Maota Fono (Parliament Building) jointly funded by the Governments of Australia and Samoa earlier this year. The new clock was installed on the wall of the main chamber above the entrance into the new Maota Fono and was unveiled by the Speaker of the House of Assembly of the Parliament of Tasmania, Hon. Sue Hickey, MP and the Prime Minister of Samoa, Hon. Tuilaepa Dr Sa’ilele Malielegaoi during a visit to Samoa in August 2019. Cabinet Ministers and Members of the Parliament of Samoa witnessed the unveiling of the clock and the Speaker of Tasmania was accompanied by the President of the Tasmania Legislative Council, Hon. Craig Farrell, MLC. The clock unveiling ceremony also included the presentation of graduation certificates to Samoan parliamentary staff who work with the Office of the Clerk of the Legislative Assembly, who have recently completed the University of Tasmania’s Parliamentary Law Practice and Procedure Graduate Certificate Course. Both the Speaker and the President of the Parliament of Tasmania addressed Members of the Samoan Parliament, dignitaries, officers and staff of the Parliament and guests. The Speaker of the House of Assembly thanked the Legislative Assembly of Samoa for the invitation to present the clock and noted that the new Maota Fono recognised and reflected the rich culture and tradition of Samoa as well as being a place for debate and law making. The President of the Legislative Council of the Parliament of Tasmania said: “Our gift is a clock made from Huon pine and it has been designed to fit in with your new building. Huon pine is a timber that is native to our home state, Tasmania. It is one of Australia’s oldest lived species. While the clock itself will count the seconds, minutes and hours, the timber represents the relationship between our two islands. The timber is well known for its rich gold colour and strength; making it one of the most desirable furniture timbers.” The President said he hoped the gift will nurture the relationship between the two Parliaments, allowing it to “grow and be as strong and long lasting as the precious natural timber that the clock is made of.” The Prime Minister of Samoa, Hon. Tuilaepa Dr. Sa’ilele Malielegaoi, MP thanked the Parliament of Tasmania for the gift and said the twinning relationship between the Parliaments of Samoa and Tasmania commenced in 2007 and was an initiative of the Commonwealth Parliamentary Association. The Prime Minister said: “Through this arrangement Samoa has benefited immensely through several initiatives such as the reciprocal visits by Members of Parliament of the two Parliaments. This process has also seen some of those Samoa Members participate as observers as part of those proceedings in the chambers and the Committee work in the Parliament of Tasmania.” In 2007, the Commonwealth Parliamentary Association Regional Secretariat established the CPA Australia-Pacific

twinning programme to foster greater cooperation and support between Parliaments from the CPA Australia Region and CPA Pacific Region. Under this programme, the CPA Tasmania and CPA Samoa Branches committed to work actively towards developing support between the two Parliaments including regular staff exchanges and training activities that promote parliamentary development. The Prime Minister of Samoa also thanked the Government of Australia for co-funding the new Parliament Building and their willingness to financially support the construction of the new office of Parliament. The official opening of the new Maota Fono (Parliament Building) at Tiafau Mulinuu was held on Thursday 14 March 2019. The new Maota Fono symbolises Samoa’s long-standing and enduring partnership with the Government of Australia. The design of the new Parliament building makes strong reference to Samoan traditional architectural form. It reflects a typical Samoan meeting fale and the Chamber ceiling is inspired by Samoa’s native flowerthe teuila. The new Parliament Building replaces the previous Maota Fono which was a gift funded by the Government of New Zealand in 1972 in celebration of Samoa’s ten years of independence. 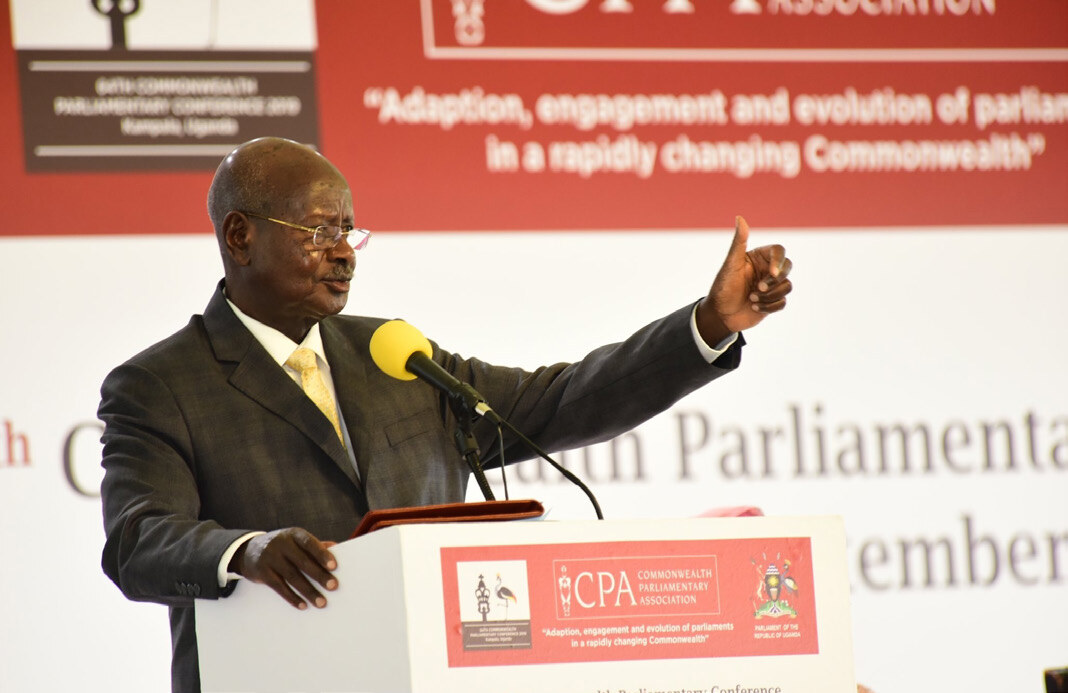 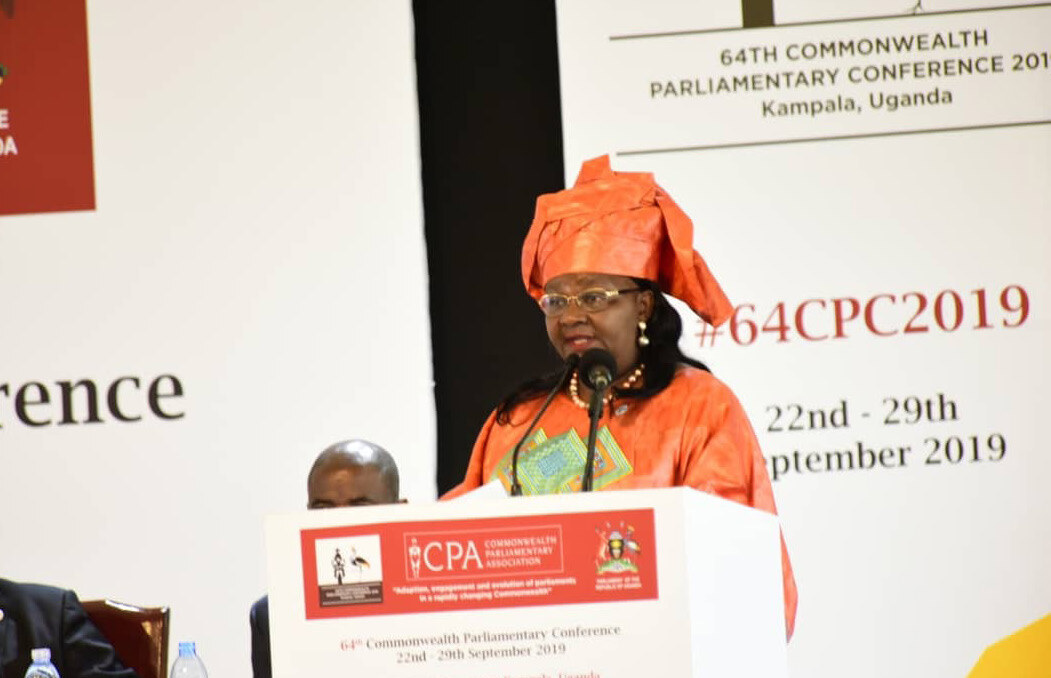 The speech at the opening ceremony of the 64th CPC in Uganda. 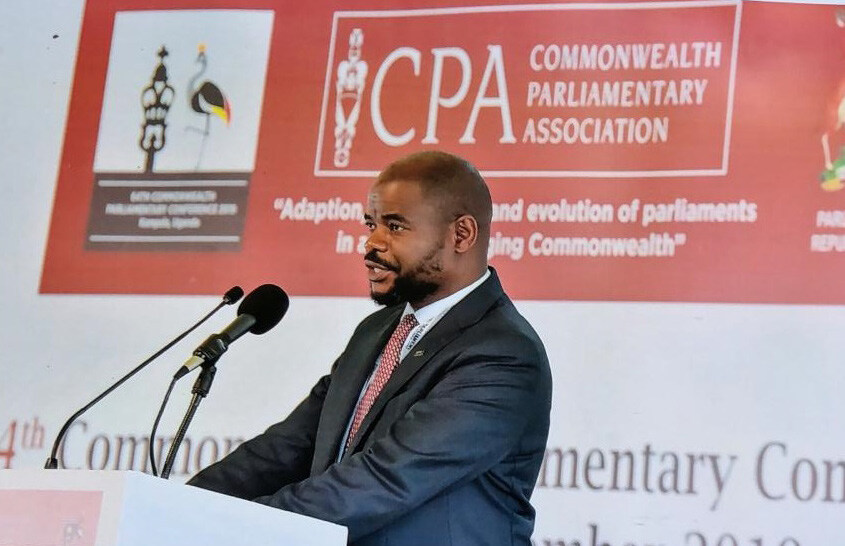