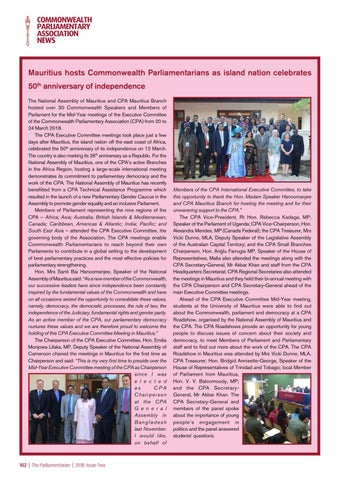 Mauritius hosts Commonwealth Parliamentarians as island nation celebrates 50th anniversary of independence The National Assembly of Mauritius and CPA Mauritius Branch hosted over 30 Commonwealth Speakers and Members of Parliament for the Mid-Year meetings of the Executive Committee of the Commonwealth Parliamentary Association (CPA) from 20 to 24 March 2018. The CPA Executive Committee meetings took place just a few days after Mauritius, the island nation off the east coast of Africa, celebrated the 50th anniversary of its independence on 12 March. The country is also marking its 26th anniversary as a Republic. For the National Assembly of Mauritius, one of the CPA’s active Branches in the Africa Region, hosting a large-scale international meeting demonstrates its commitment to parliamentary democracy and the work of the CPA. The National Assembly of Mauritius has recently benefitted from a CPA Technical Assistance Programme which resulted in the launch of a new Parliamentary Gender Caucus in the Assembly to promote gender equality and an inclusive Parliament. Members of Parliament representing the nine regions of the CPA – Africa; Asia; Australia; British Islands &amp; Mediterranean; Canada; Caribbean, Americas &amp; Atlantic; India; Pacific; and South East Asia – attended the CPA Executive Committee, the governing body of the Association. The CPA meetings enable Commonwealth Parliamentarians to reach beyond their own Parliaments to contribute in a global setting to the development of best parliamentary practices and the most effective policies for parliamentary strengthening. Hon. Mrs Santi Bai Hanoomanjee, Speaker of the National Assembly of Mauritius said: “As a new member of the Commonwealth, our successive leaders have since independence been constantly inspired by the fundamental values of the Commonwealth and have on all occasions seized the opportunity to consolidate these values, namely, democracy, the democratic processes, the rule of law, the independence of the Judiciary, fundamental rights and gender parity. As an active member of the CPA, our parliamentary democracy nurtures these values and we are therefore proud to welcome the holding of this CPA Executive Committee Meeting in Mauritius.” The Chairperson of the CPA Executive Committee, Hon. Emilia Monjowa Lifaka, MP, Deputy Speaker of the National Assembly of Cameroon chaired the meetings in Mauritius for the first time as Chairperson and said: “This is my very first time to preside over the Mid-Year Executive Committee meeting of the CPA as Chairperson since I was e l e c t e d as CPA Chairperson at the CPA G e n e r a l Assembly in Bangladesh last November. I would like, on behalf of

Members of the CPA International Executive Committee, to take this opportunity to thank the Hon. Madam Speaker Hanoomanjee and CPA Mauritius Branch for hosting the meeting and for their unwavering support to the CPA.” The CPA Vice-President, Rt Hon. Rebecca Kadaga, MP, Speaker of the Parliament of Uganda; CPA Vice-Chairperson, Hon. Alexandra Mendes, MP (Canada Federal); the CPA Treasurer, Mrs Vicki Dunne, MLA, Deputy Speaker of the Legislative Assembly of the Australian Capital Territory; and the CPA Small Branches Chairperson, Hon. Anġlu Farrugia MP, Speaker of the House of Representatives, Malta also attended the meetings along with the CPA Secretary-General, Mr Akbar Khan and staff from the CPA Headquarters Secretariat. CPA Regional Secretaries also attended the meetings in Mauritius and they held their bi-annual meeting with the CPA Chairperson and CPA Secretary-General ahead of the main Executive Committee meetings. Ahead of the CPA Executive Committee Mid-Year meeting, students at the University of Mauritius were able to find out about the Commonwealth, parliament and democracy at a CPA Roadshow, organised by the National Assembly of Mauritius and the CPA. The CPA Roadshows provide an opportunity for young people to discuss issues of concern about their society and democracy, to meet Members of Parliament and Parliamentary staff and to find out more about the work of the CPA. The CPA Roadshow in Mauritius was attended by Mrs Vicki Dunne, MLA, CPA Treasurer; Hon. Bridgid Annisette-George, Speaker of the House of Representatives of Trinidad and Tobago; local Member of Parliament from Mauritius, Hon. V. V. Baloomoody, MP; and the CPA SecretaryGeneral, Mr Akbar Khan. The CPA Secretary-General and members of the panel spoke about the importance of young people’s engagement in politics and the panel answered students’ questions.